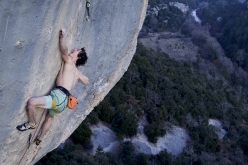 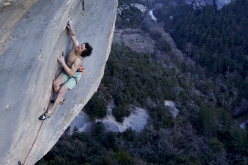 Adam Ondra / Interview after world's first 9a+ flash at St. Léger in France

Interview with Czech climber Adam Ondra after the historic world’s first 9a+ flash, on Super Crackinette at Saint-Léger du Ventoux climbed on 10 February 2018.

On Saturday afternoon at Saint-Léger du Ventoux in France Adam Ondra added another chapter to sport climbing history once again by making a flash ascent of a 9a+ sports climb. This is the first time ever that a route of this heinous difficulty has been climbed first go and knowing some beta - hence the flash style - and Ondra did so on the beautiful Super Crackinette. These intense 20 meters were freed in 2016 after 3 days of work by another superb climber, Alexander Megos, and this ‘certification’ is important as in 2013 it was the German who wrote climbing history himself when he became the first climber in the world to climb a 9a onsight. With his flash ascent Ondra has now raised the bar by half a grade. So after three 9b+, seventeen 9b, after three 9a onsights and after Silence (the hardest sport climb in the world and the first to be graded 9c), here’s another chat with the 25-year-old from Brno, Czech Republic.

Adam, world’s first 9a+ flash. Where did this outstanding performance come from?
I’ve had the idea in my mind for quite a long time and ever since I tried to flash Biographie at Céüse I began to think that it wasn’t an impossible dream.

That was back in 2012, we remember it well, it seemed audacious at the time
Actually I’d thought about trying it back in 2008. But in that moment the idea of flashing 9a+ seemed ridiculous, simply too far fetched even to me. My 2012 flash attempt of Biographie went well, I made it all the way up to the crux, but the open pockets up there are my nightmare holds and I was just too pumped.

Then came Southern Smoke Direct later that year at Red River Gorge
Yes. But I knew though that it wasn’t 9a+. It hadn’t been repeated yet, but Daniel Woods and Jon Cardwell were close to making the second ascent and they told me it was 9a. So I knew it wasn’t 9a+, and mentally that made a big difference.

And then?
Well, I ran out of routes to try.

So you had to wait for new ones to come about?
Yes, precisely! In 2015, when I freed C.R.S. at Mollans in France, I also visited St. Leger and it was then that I first saw Super Crackinette. At the time it was still a project, an incredible line, it seemed impossible that something that ridiculously beautiful could be climbed all on natural holds. But it could, and when Alexander Megos made the first ascent in 2016 I was super happy. And even more happy when he certified it as 9a+. The perfect 9a+ flash candidate!

Was that your big goal at St Leger?
Yes. The idea was to climb here for 1 or 2 weeks, get used to the style, and then try the flash. Unfortunately though much of the crag was wet, the only completely dry route was Super Crackinette, but I didn’t want to jump on it straight away.

And so?
Not really knowing what to do I tried some 9a+ projects which were semi-dry, but even after a few days of effort I failed. Trying these routes with wet holds wasn't a good idea because I started to doubt that I’d succeed on Super Crackinette, was I really strong enough to send 9a+ first go? Perhaps I should postpone the trip to next year? This doubt transformed into a big mental fight.

The what happened?
Well in the end I organised with Spanish photographer Bernardo Gimenez that he would come and film me making an attempt, and Quentin Chastagnier would provide me with the beta. Quentin bolted not the entire line but the direct start, knows it really therefore and we organised to meet up in the morning, I’d belay him as he tried it twice, then I’d wait for late afternoon and give it a go. So as things turned out, there was no way I could take a step back.

Suddenly you were under pressure?
Enormous! I’d say it was bigger than in the finals of the World Championships in Paris! Also because I lacked the confidence I’d hope I’d have. I’d taken two days off before, the warm-ups went well and I started to feel the flow, but I didn’t expect much.

That’s an interesting state of mind!
Yeah, it was an interesting mix between being a bit confident because of all my training previously, being highly motivated because this is something I’ve wanted for so long, but also having expectations that were rather low. But when I started climbing, I switched off and completely entered the flow…

So tell us about the actual ascent
I knew that it was meant to be relatively easy to the 3rd bolt, then a bouldery crux between the 3rd and 4th bolt, and then from there it just keeps on going. I climbed to the 3rd bolt easily, and then I did the first crux easily, too. Without any great difficulties, and that really motivated me. The next two bolts went easily, too, despite the fact that there are hardly any places to stop and chalk up, and suddenly I felt super strong mentally. More importantly, I didn’t feel pumped!

And then?
Super Crackinette joins the original Crackinette, an 8c, and there are 2 pockets where I thought I’d be able to rest. But my fingers didn’t fit in properly and what I had imagined would be the best section actually turned out to be the worst section of the route! After this there’s one last hard move and I was worried I’d not have enough strength for the last small crimp. The I switched off my mind and powered up, in that moment there was nothing stopping me getting to the anchor. And from creating what I regard as one of my proudest achievements in my climbing career.

This is a flash ascent, which means you knew something about the route. You’d belayed Quentin twice, but how much did you know? And did he, for example, guide you up with the beta as you climbed?
Well although I’d never actually tried the route before, I knew it completely off by heart. Quentin didn’t shout up while I climbed - guiding me would have been too slow - but he’d provided me with all the information I needed before setting off. I knew each hold intimately, I knew if it was incut or sloper, I knew the footholds. I visualised all the holds before setting off and when I got to them they were exactly as I’d immagined, sometimes even better. I’d also thought about some different beta and on 2 or 3 sections I changed the sequence when I got there. If you watch the footage, it doesn’t look like a flash, it looks like a perfectly executed redpoint. But I’d never touched the holds before.

You’ve already partially answered the last question Adam. It would have been: if you had to chose between 9a onsight or 9a+ flash, what’s more important?
They’re equal. Absolutely. Having said that, personally I consider 9a+ harder mentally, because as I said before, there are far more 9a to choose from. And if you're’ going to ask me about the next step, about 9a+ onsight? Well the answer is no, absolutely not. I just can’t imagine it at the moment. For me at least, it’s too far off!