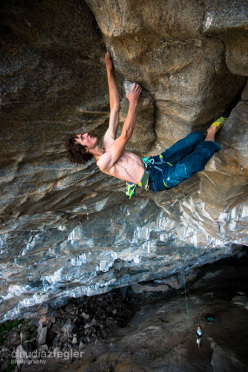 Adam Ondra making the first ascent of Move 9b/+ at the Hanshelleren cave in Flatanger, Norway (08/2013)
Photo by Claudia Ziegler

PORTFOLIO / gallery Portfolio: Adam Ondra frees another 9b in Norway

Adam Ondra frees another 9b in Norway

Czech climber Adam Ondra has made the first ascent of Move 9b at the Hanshelleren cave in Flatanger, Norway.

Ondra continues to delve into a level of difficulty that only few others are currently capable of, and once again the speed with which he succeeds is astounding. The latest success comes from the depths of the Hanshelleren cave in Flatanger, Norway where a mere three weeks of effort were needed to free Move, described by Ondra as a "hard 9b".

Filmmaker Petr Pavlíček who witnessed some of the efforts stated it was all "Much faster than expected, as Adam found better and very painful knee rest before the last bouldery part, conditions got super good and he felt in great shape."

This is now the third 9b/+ sport climb Ondra has put up in the Hanshelleren cave after Iron Curtain 9b at the start of August and, of course, Change, the world's first 9b+ freed in October 2012.