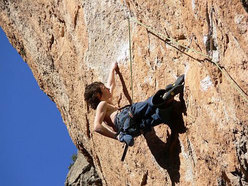 It was just a matter of time. But, in all honesty, no one could have thought that things would have progressed so quickly. But they have: yesterday evening Adam Ondra, the undisputed young prodigal sports climber, amazed all with his ascent of the legendary La Rambla 9a+, in just two days, fifth go.

So La Rambla, the hardest route in Spain, the route par excellance which for 5 years has been considered a reference point for the hardest possible, has been literally walked up by the fifteen year old from the Czech Republic! There's no point adding that this is the fastest ascent to date, the youngest climb ever etc etc. Quite simply: amazing!

But the speed and relative "ease" with which Ondra (and the likes of Usobiaga & Co) climb these super 9a's provoke reflection. These recurrant super performances prove what we've been stating for some time: perhaps we're only at the very beginnings, perhaps we still haven't been given an insight into what the true, extreme climbing difficulties really are.

We believe that the time has now come for all these super athletes to make a significant step forward, both in terms of quality and perhaps even commitment. Who knows what they might achieve after not just 5, but 50 attempts on one of their own routes? Perhaps the key to the future lies in their projects, the lines they search for personally, the style in which these are ascended.

Congratulations to all. But the time has now come to invent something new.