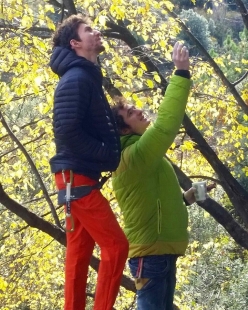 Sipping tea and climbing 9b... Stefano Ghisolfi and Adam Ondra at the crag Laghel at Arco, Italy
Photo by Sara Grippo

Adam Ondra has made the first ascent of One Slap, a new 9b sports climb at the crag Laghel close to Arco. This is the second 9b in Arco and the third in Italy.

There’s a new 9b in Arco and, once again, it’s been put up by Adam Ondra. After the first ascent of Queen Line at the crag Laghel last April, the Czech climber has now freed One Slap at the same crag. The new route adds a direct start to One Punch, a climb established by local Stefano Ghisolfi at the start of May.

Ondra pulled off the first repeat of One Punch after various days of work spread out over the last few months, and he commented that it’s probably closer to 9a+/b than the 9a+ put forward initially by the Italian. After having added a bolt at the start, Ondra then freed the more difficult direct start to produce One Slap.

Not content, Ondra then freed another 9a nearby, rendering Laghel one of the crags with the highest concentration of cutting-edge climbs in the world:1 x 9a, 1 x 9a+/b and 2 x 9b, as well as other projects even harder still…

One Slap is the third 9b in Italy after the aforementioned Queen Line and Lapsus at Andonno, freed by Ghisolfi in November 2015.

02.05.2017
Stefano Ghisolfi adds new 9a+ to Arco, Italy
At Laghel close to Arco, Italy's Stefano Ghisolfi made the first ascent of One Punch, a new 9a+ sports climb. Stefano Carnati repeated Il Frutto del Diavolo 8c+/9a at Bus de Vela and at Narango Alexander Megos made one of the hardest onsights on Italian soil.

21.04.2017
Adam Ondra repeats Lapsus at Andonno, second 9b in two days
Czech climber Adam Ondra has made the first repeat of Lapsus, the 9b sport climb freed by Stefano Ghisolfi at Andonno, Italy. This is Ondra’s second 9b in just two days, after his first ascent of Queen Line at Laghel (Arco). Ondra ended the day in style by making a second-go redpoint of a 9a at the crag Castelbianco.