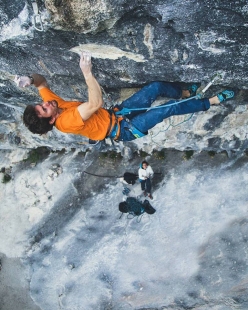 Stefano Ghisolfi making the first ascent of One Punch 9a+ at the crag Laghel, Arco
Photo by The Vertical Eye - Matteo Pavana

At Laghel close to Arco, Italy's Stefano Ghisolfi made the first ascent of One Punch, a new 9a+ sports climb. Stefano Carnati repeated Il Frutto del Diavolo 8c+/9a at Bus de Vela and at Narango Alexander Megos made one of the hardest onsights on Italian soil.

The spotlight is once again on the Italian crag Laghel close to Arco. After Adam Ondra’s first ascent of the 9b Queen Line ten days ago, local climber Stefano Ghisolfi has now freed his project immediately to the left. The route, aptly called One Punch, fell after 10 days of attempts and was described by the Italian climber as "the hardest 9a+ I've ever done so far, probably close to 9b."

The 24-year-old, who in March made a fourth-go repeat of La Rambla at Siurana, can now turn his attention to Queen Line or the other projects in this sector recently ‘converted' to sport climbing after having been bolted by Diego and Mauro Mabboni for dry tooling.

In other Arco related news, at the crag Narango Alexander Megos onsighted the 8c/c+ Natural Present which, as the German quite rightly states, "doesn't happen too often" and is consequently one of the hardest ever onsights on Italian soil. The first to onsight an 8c in Italy was Adam Ondra, in 2009 at Covolo. Meanwhile at Bus de Vela Stefano Carnati pulled off a rare repeat of Il Frutto del Diavolo, a 8c+/9a freed by Gabriele Moroni in 2010.

05.05.2009
Adam Ondra and the first 8c on-sight in Italy
A fortnight ago Adam Ondra from the Czech Republic on-sighted Italy's first 8c, Nagay at Covolo. The 16-year-old then doubled his takings with Una Vida Nomada the same day.