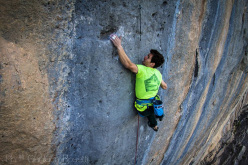 At Ceuse in France Stefano Ghisolfi has repeated Biographie 9a+

“Sooner or later all the world's best come to climb this line.” This is what we wrote last year, when Sachi Amma and Adam Ondra repeated Biographie, the 9a+ reference route at Céüse in France. Now the person who has come to red point the route is Stefano Ghisolfi, the Italian climber who on Sunday afternoon, much to his own surprise on the last attempt of the day, added his name to the “hall of fame” of this superb route freed by Chris Sharma in 2001. After the Frenchmen Sylvain Millet and Enzo Oddo, the Spaniards Patxi Usobiaga and Ramón Julián Puigblanque, the Americans Dave Graham, Ethan Pringle and Jonathan Siegrist, Germany’s Alexander Megos and Adam Ondra from the Czech Republic and Sachi Amma from Japan, Ghisolfi is now the first Italian to link these 60+ moves. In doing so Ghisolfi has also climbed his third 9a+, after Le moustache qui fâche at Entraygues in France and Demencia Senil 9a+ at Margalef in Spain, proving that he’s in excellent shape for the imminent Lead World Cup.

Biographie. It’s part of climbing history and is one of the most famous routes in the world. I’d dreamt of it but, until recently, I never thought I’d manage to send it...

I began trying it three weeks ago and I decided to attempt it only on the weekends, instead of staying for a longer period, so that I could continue training during the week. At the first weekend I managed to do all the individual moves, both the bouldery start and the bouldery finish, but I didn’t even manage to reach the first chain which, in its own right, is given 8c+. During the second weekend I made some big steps forward, on Sunday I climbed past the first chain and fell just before the final pocket, but then I cut my finger and had to stop trying. Last weekend Sara and I didn’t travel from Turin to Ceuse because it rained and the route was wet, which meant I had only one weekend left as it was beginning to get very close to the World Cup. After a good attempt on Saturday, during my first go on Sunday I fell going for that final pocket. On my next attempt, just like two weeks previously, I gashed open my finger once again and thought I had to give up. But Sara and Gianluca Bosetti, who had come to Ceuse especially to film the climb, convinced me to give in one last go. I taped up and set off, halfway up I tore off the tape with my teeth and, covering all the holds in blood, I managed to clip the chain. Climbing Biographie was like to experiencing a piece of history, and I'm happy to have added an Italian flag to the list of repeaters!