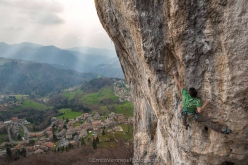 Stefano Ghisolfi making the 4th ascent of Goldrake 9a+ at Cornalba, after Adam Ondra (2010), Gabriele Moroni (2014) and Stefano Carnati (03/2015)
Photo by Enrico Veronese

Goldrake gives in Stefano Ghisolfi, too. After Stefano Carnati a few weeks ago, Gabriele Moroni in 2014 and Adam Ondra in 2010, last weekend Stefano Ghisolfi managed to redpoint this technical 9a+ located on Cornalba’s East Face. Ghisolfi success came about quickly - in just two weekends - and this is now his 4th 9a+ after Biographie at Céüse, Demencia Senil at Margalef and Le moustache qui fâche at Entraygues. An important list, which must also include Lapsus at Andonno, the first 9b sports climb in Italy.

I first attempted Goldrake two weekends ago together with Silvio Reffo. On day one I tried all the crux moves and the lower section, but I didn’t even manage to a move on the top slab and so I didn’t even reach the chain! The next day I figured out how to do that move, linked some of the crux sequences and realized that I stood a chance of climbing it quickly.

I returned last Saturday and fell off the last hard move on the crux, and decided to not climb too much to give myself a good chance the next day. On my first attempt on Sunday morning I sent he crux but then peeled off the final slab, I reckon falling from where no-one had ever fallen before! I gave it another shot and fell off the first crux… and then, last go of the day, when I was more tired than before and with a bloody little finger, I managed to clip the chain!