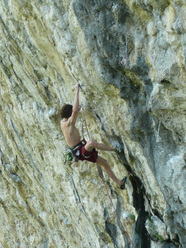 Adam Ondra in action at Covolo.
Photo by Luigi Billoro

Adam Ondra and the first 8c on-sight in Italy

A fortnight ago Adam Ondra from the Czech Republic on-sighted Italy's first 8c, Nagay at Covolo. The 16-year-old then doubled his takings with Una Vida Nomada the same day.

Two weeks ago Adam Ondra decided to try his luck at the Italian crag Covolo, one of the areas with the highest concentration of hard routes in the country. The result, in banal numbers, is a staggering three 8b+ on-sight, the first ascent of "Super Al"e 8c+ and, above all, two 8c on-sights, "Nagay" and "Una Vida Nomada".

It must be said straight off that Covolo certainly isn't the easiest crag in the world. On the contrary, it is renowned for it's beautiful but complicated climbing. With his nth "miraculous" performance Ondra managed not only to on-sight two 8c's in a day (no one else so far has managed such a feat), he also managed the first 8c on-sight in Italy. This is an important moment thereore for hard sport climbing in Italy and this result comes five years after the historic first ever 8c on-sight at the hands of Japanese climber Yuji Hirayama who climbed White Zombi at the Baltzola Cave in Spain.

Covolo, described by Adam as fun and really really impressive, has already been the scene of startling performances in the past. Such as that of Cristian Brenna who, making the most of his amazing form, managed to on-sight "Ghegoro" 8b+ after having redpointed Nagay second go. And such as that of David Lama who in July last year sent "Il guerriero del futuro" 8c+/9a second go. Perhaps these two moments gave an insight into what the future holds. For the record, Brenna's super star day took place exactly ten years ago! Who knows what the next decade holds in store... in the meantime let's enjoy the present future by Adam Ondra, the climber who rightly sits among those elect few who in every era have managed to take the rope there where everyone thought it impossible.