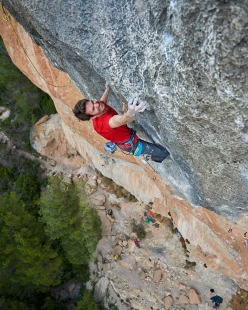 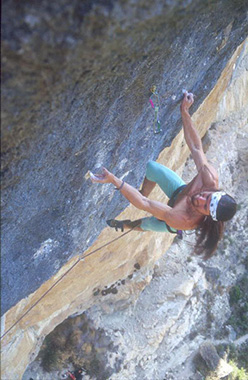 Italian climber Stefano Ghisolfi has repeated La Rambla, the famous 9a+ sport climb at Siurana in Spain, on his fourth attempt.

For most tourists, La Rambla is the famous street in Barcelona, ​​a chaotic hustle and bustle in the heart of the Catalonian capital. For climbers though, La Rambla represents one of the most coveted sport climbs in the world located at nearby Siurana that, in winter, transforms into a hotbed of international climbers.

The history of this climb is quickly summed up: it was first ascended by Germany’s Alexander Huber in 1994 up to pocket at 3/4 height, then extended by Ramón Julián Puigblanque in 2003 to the top of the crag to get its 9a+ grade. At that time it was the most difficult climb in Spain, a pure resistance test for very best, and these overhanging 40 meters had to wait three years for the first and second repeat by Edu Marin and, shortly afterwards, Chris Sharma.

Courted by all of the world’s best throughout subsequent winters, there are other notable milestones worth recalling: the repeat in 2008 by 15-year-old climbing prodigy Adam Ondra for instance, and the 2013 second-go redpoint by Alexander Megos just a few days after the historic first 9a on-sight. And, above all, the repeat a month ago by America’s Margo Hayes who, in doing so, became the first woman to climb 9a+.

Seeped in history, La Rambla is a symbol for sport climbing, one of the world’s most sought-after climbs that even Italy’s Stefano Ghisolfi could not resist. As soon as he arrived in Siurana he hopped on the line; on Sunday he made a flash ascent to the tricky crack, then on his second attempt he fell shortly below the crux. Yesterday morning Ghisolfi made it to the last hard move before being kicked off but then, in the afternoon shade, he made the redpoint. "Unexpectedly", as he himself confesses, on only his fourth attempt.

This could now be the 14th ascent of La Rambla in its 14 year history, and it is now the Ghisolfi’s 10th 9a+ or harder, as listed below.