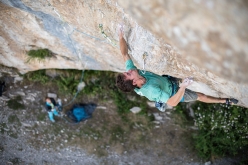 Stefano Ghisolfi climbing Jungle Boogie 9a+ at Céüse, France. The route was freed in 2010 by Adam Ondra
Photo by Paolo Sartori

At Ceuse in France Stefano Ghisolfi has repeated Jungle Boogie, the 9a+ sports climb freed by Adam Ondra in 2012.

9a almost second go indicates that there is probably far more in store. This is what Italy’s Stefano Ghisolfi told himself when he sent - as things turned out on his fifth go - Le Cadre Nouvelle at Céüse last May. This route is located next to Biographie, the world’s reference 9a+, perhaps the most famous climb in the world of its grade, that the Turin-based climber had reappointed in 2015. Just a few meters to the left lies its "little sister", namely the far shorter and more intense Jungle Boogie. Freed by Adam Ondra in 2012 and repeated by Japan’s Sachi Amma in 2015, this climb presents a totally different sort of challenge, with 20 extremely tough moves followed by a complicated 20m slab. Put in other words, a test which might shed some light onto the 23-year-old’s question.

Ghisolfi needed 10 days to tick Jungle Boogie, split over various weekends during which he worked, refined, and also changed the sequence a thousand times. And during which he was also overcome by a thousand doubts as he hung off the rope, or directed his van along the 450km journey from home to Céüse and back again.

On Sunday 2 October Ghisolfi pushed all doubts aside, stuck the crux and redpointed the line. "I had climbed the route and won the battle against myself, I’d destroyed the frustration, pessimism and insecurity, and then finally I removed my draws and released the heavy burden in the best possible way. Although I had stopped believing in myself many days beforehand, I had never stopped to trying the route. I never really gave up and regained confidence by looking at things from another angle (with a little outside help - a different foothold indicated by his girlfriend Sara Grippo, Editor’s note), and won. I only spent 10 days trying the route, but inside of me it felt like years, entire periods of time dominated by thoughts, my motivation went on a rollercoaster ride and any tiny detail demolished it completely, or proved uplifting. I spent so much time dangling off the rope, and even more time hanging by a thread, the thread of motivation, often very subtle, but the decisions I made ensured this never broke, and it was the tiny details that made all the difference."

Jungle Boogie is now Ghioslfi’s sixth 9a+ or harder, after Biographie at Céüse, Demencia Senil at Margalef, Le moustache qui fâche at Entraygues, Lapsus at Andonno and Goldrake at Cornalba.