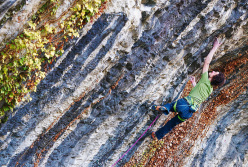 Today at Ceuse in France Adam Ondra made the first ascent of the climb Jungle Boogie 9a+.

It was a project initially started by local climber Sylvain Millet. Then taken up by young Frenchman Enzo Oddo. In the end it had to give in to the super power of the usual Adam Ondra who in three days of attempts (!) managed to carry out the first ascent of Jungle Boogie, the intense outing up the left-hand side of the famous Biographie sector at Ceuse in France.

"It's 16 meters of non-stop climbing, followed by another 12 meters of easier terrain" Ondra told Planetmountain, adding "the first section climbs micro holds without any rests. You need to climb it as quickly as possible, it's a real sprint, and I fell twice off the last hard move which I thought was absolutely impossible to fall off!"

The grade? "9a+" Ondra replied convinced, adding "the same difficulty as nearby L'étrange Ivresse des Lenteurs, but a completely different style. Instead of a long resistance route, Jungle Boogie requires pure power endurance".

Ondra will be in Ceuse for another two days. It's not excluded that we'll hear more in the near future...