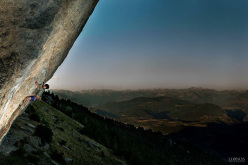 Sachi Amma got one step closer to finishing off this year’s project - sending ten routes 9a or harder - by redpointing Jungle Boogie yesterday afternoon. As reported last month, the Japanese climber had attempted Adam Ondra’s 2012 testpiece up at Ceuse earlier this summer, but had been forced to abandon his attempts due to poor conditions.

He returned recently to the crag and, on his very last attempt before having to leave for Germany, got the redpoint. This ascent brings his 2015 tally to one 9b, three 9a+ and three 9a’s, most of which were climbed in Spain at the start of the year.