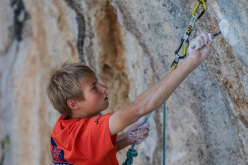 On 29 March 2013 German climber Alexander Megos redpointed one of the world's reference 9a+, La Rambla at Siurana in Spain, on his second attempt.

What should someone do who's just sent a 9a onsight? Attempt to flash a 9a+! That's exactly what young Alexander Megos thought last Friday at Siurana, the crag where not even a week previously he completed the world's first 9a onsight.

So how did it go? Unbelievable: Megos got his friend Felix Neumärker to explain the moves to him and then he launched up La Rambla, one of those reference sport climbs that all the strongest dream of adding to their curriculum. Megos climbed for about 15 minutes, reached the crux at the top, fought and then fell. "I fell fairly high up at the crux" the German explained to Planetmountain "there were only another two hard moves." Two moves short of flashing 9a+! Then, after a 2 hour rest, Megos dispatched the redpoint. La Rambla, that route first climbed by Alexander Huber back in 1994 to a pocket at 3/4 height, then extended in 2003 by Ramón Julián Puigblanque, repeated in a mere 2 attempts. Unheard of! And as if that weren't enough, Megos also redpointed A Muerte, the route put up by Englishman Rich Simpson in 2006. This, too, second go.