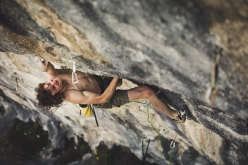 Adam Ondra making the first ascent of Queen line 9b at the crag Laghel at Arco, Italy
Photo by The Vertical Eye - Matteo Pavana

Yesterday at Laghel close to Arco (Italy) the Czech climber Adam Ondra made the first ascent of Queen Line, the first sport climb in the area to be graded 9b.

After years of no longer being at the forefront of extreme sport climbing, the small Italian town of Arco now hosts its first 9b thanks to the usual Adam Ondra who, during his incursions across Europe, almost never misses the chance to leave his mark.

This time the Czech climber freed a circa 20m route at the crag Laghel, in its steep sector originally bolted by Diego and Mauro Mabboni specifically for dry tooling but recently 'converted' to sport climbing. The sector currently hosts only three lines and the new route, called Queen Line, starts up the central route and after 10 intense meters finishes up the righthand line. Ondra tried the route briefly last year and according to 24-year-old it may well be a hard 9b. The real challenge though, the King Line as it were, is the entire central line and this may weigh in at 9b+ or even harder.

It’s early days though for a super outing of this sort. In the meantime Queen Line has been freed and the route to its left is a circa 9a+ project currently being attempted by new local Stefano Ghisolfi. Italy’s first 9b, Lapsus at Andonno, was freed by Ghisolfi in November 2015 and still awaits its first repeat and confirmation.

Back to Ondra: he ended what is by all accounts an amazing day by repeating Ultimatum, the 9a+ freed by Ghisolfi at Massone in December 2016. It’s worth noting that a few days earlier Ondra managed to onsight an 8c in Germany’s Frankenjura, namely Masters of Universe. While at first glance this may seem not particularly impressive, as 8c onsight was first achieved in 2004 by Yuji Hirayama and nowadays the max has settled in at 9a, this is without a shadow of doubt a significant ascent. In fact, it is only the second 8c onsight in the Frankenjura after Alexander Megos made swift work of Solitary Man in 2015.