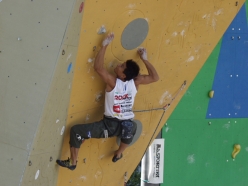 Yuji competing in the Rock Master 2001, which he won joint equal with Tomas Mrazek and Christian Bindhammer
Photo by Planetmountain.com

It's been done, finally! The first ever 8c on-sight, by none other than Yuji Hirayama. The Japanese, who in 1999 stunned the world with his on-sight of Mortal Kombat at Castillion (8c at the time, successivly downgraded to 8b+) has now on-sighted White Zombi at the wildly overhanging Baltzola Cave, Spain.

After his victories in the World Cup in 1998 and 2000, Yuji dedicated his energies to hard first ascent (Flat Mountain, 9a+, 2003) and on-sights (especially on Yosemite's big walls). Hirayama commented his ascent as follows: "It was difficult to wait for the right conditions: I waited for three days and then I finally realised this year's most important goal. I'm really happy to have set a new record in on-sighting." On the same trip Yuji also redpointed Tas Tas, 8c+/9a.

Hirayama is widely considered one of the greatest interpreters of this young sport, and this performance is without a doubt an fundamental milestone in its history. Local climber Josune Bereciartu told us: "I'm not surprised that Yuji on-sighted White Zombi. He's a super strong climber, technical and with a lot of stamina. He has a lot of experience at on-sighting, and this route let's you fight all the way - we descibe it as a noble route. I'm obviously really happy for Yuji, and the fact that the first 8c on-sight was done here in the Basque country is really motivating."

To fully grasp the magnitude of the achievement, consider the fact that nine years have passed since the first 8b+ on-sight (Elie Chevieux, Massey Fergusson 8b+ Calanques 1995) and that 8c was flashed for the first time only this year (Kilian Fischhuber, Tai chi 8c, Lorünser Steinwand, Austria). Congratulations!