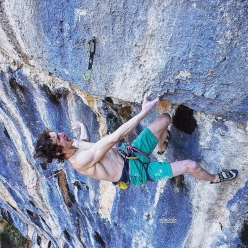 Adam Ondra making the first repeat of Lapsus, the 9b sport climb freed by Stefano Ghisolfi in 2015 at Andonno, Italy
Photo by Jan Novak photography 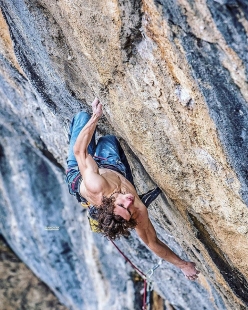 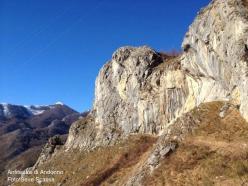 Czech climber Adam Ondra has made the first repeat of Lapsus, the 9b sport climb freed by Stefano Ghisolfi at Andonno, Italy. This is Ondra’s second 9b in just two days, after his first ascent of Queen Line at Laghel (Arco). Ondra ended the day in style by making a second-go redpoint of a 9a at the crag Castelbianco.

Adam Ondra once again, insatiable and irrepressible. Just two days ago the 24-year-old gave Arco its first 9b, Queen Line at Laghel and, conscious of his amazing form, he immediately hit the road for Andonno in NE Italy. Ondra’s mission: deal with a route he’d tried in early March, namely Lapsus, the 70+ move climb freed by Stefano Ghisolfi in November 2015 famous for being Italy’s first 9b.

Conditions yesterday were perfect and Ondra seized the opportunity, confirming the difficulties put forward by Ghisolfi and telling planetmountain.com that he felt the route probably fit into the lower end of the 9b grade bracket. His height, he explained, was definitely an advantage at the crux which he managed to do statically instead of having to dyno as Ghisolfi had been forced to do.

"The route climbs really well" Ondra recounted "The first part on Noia is amazing, up bulletproof rock and past interesting moves. I love it. The upper crux has a few artificial holds - not chipped by Ghisolfi - that make the route less perfect but it still offers nice climbing in the wonderful setting at Andonno." Just like two days ago, Ondra ended the day in style by travelling to the crag Castelbianco and making a second-go redpoint of Perfect Man 2.0 freed by local Matteo Gambaro.

Ondra has now redpointed the two most difficult sport climbs in Italy, Queen Line and Lapsus, and to these one has to add Marina Superstar located in Sardinia and freed by Ondra in 2009. Back then the 16-year-old suggested 9a+/b and the route still awaits its first repeat. In the meantime Ondra has obviously climbed extensively and his list of nineteen 9b climbs or harder simply has no equals.

planetmountain.com reached out to Ondra to ask how he - always and unconditionally - pushes himself to the max. He replied "Actually, finding the right motivation is not easy and I am forced to work with that a lot while training on my own. But there are many ways I get motivated: just wanting to do that superb move for instance, or watching someone else on their own project trying super super hard, even if it’s easy for me. That’s the beauty of climbing."