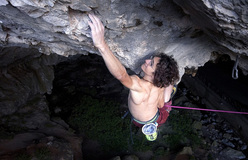 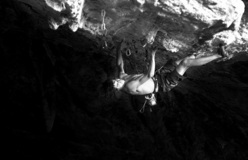 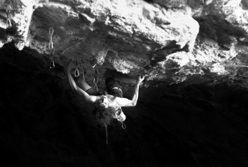 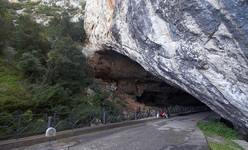 The Grotta San Giovanni in Sardinia.
Photo by Vojtech Vrzba

Interview with Adam Ondra who on 20/10/2009 made the first ascent of his hardest route ever, Marina Superstar at Bronx at the crag Grotta San Giovanni in Sardinia. The young Czech climber has "suggested" 9a+/b!

Exactly a year ago Adam Ondra presented Sardinia a beautiful gift with the first ascent of Campo con Corvi, the first 9a on the Mediterranean island located at a crag called Bronx at the astounding Grotta San Giovanni. During that trip the Czech climber also managed to free a route close by called Marina which, despite finishing at half-height, still weighed in at a massive 8c/c+. At the time Ondra realised that climbing the route to its natural finish at the top would be possible, but the 16 year old quickly understood that his strength and stamina wouldn't suffice to link these 35 meters. The route remained a project, but not any old dream - it became Ondra's main objective for 2009. On 20 October Ondra managed to send the line, his hardest to date, now called Marina Superstar 9a+/b... Obviously we wanted to find out more directly from Adam himself about his latest journey!

Congratulations Adam! Can you tell us a bit about the route?

The route is located in Bronx at the northern entrance to the San Giovanni cave - a natural cave more than 500m long which until 20 years ago you were even allowed to drive drive through! The route follows the right arête of the cave and is about 35 meters long, of which 30 meters climb a 50° or even steeper overhang. The first part is 8b+ and contains about 10m of powerful moves on bad tufas. This was equipped some years ago while the rest was bolted by Matteo Marini last year, who placed another chain at half-height. Last October I freed this up anchor at half-height and rated 8c/c+. I knew the rest was possible but it required lots of endurance and work, so I gave up and focused on Campo con Corvi, another open project which I successfully freed at the end of the trip.

But you never forgot about the Bronx...
I knew I had to come back. And I returned exactly one year later. I quickly realised that the key would be to climb the first half as fast as possible in order to be fresh for the crux, just above this chain. This crux is about Fb7C+, without any rest below, with 6 moves on reasonably good holds which are very far apart. After this crux you have to climb another 15 meters of pumpy and steep 8b terrain.

How did you attempts go?
During the first two days I kept falling off the crux. On the third day I broke a good tufa just a few moves below the chain at half-height, while on the fourth day I broke another one. This eliminated the rest below the crux and I was forced to use another tufa which was completely soaked. To dry my hands I had to use the poor tufas above, so the first half became a certain 8c+. During the afternoon on the 4th day I started to feel the pressure. The period of good weather and the dry northern wind was coming to an end. I finally fought my way through the crux and then just kept climbing...

And you did it! How did you feel?
Amazing did it on 20th October, the very same day as Campo con Corvi 9a just 5 meters away. Over the next days I realised my success even more.: the route was wet and unclimbable the day after my ascent and didn't dry out until we left.

What can you say about the difficulties?
It is definitely the hardest route I've ever done. For me it was slightly harder than any other 9a+ I've done (La Rambla, Papichulo, Open Air, Corona), although I have to admit Marina Superstar is less my style, requiring me to do some super powerful moves. I prefer routes which are less steep. For more than 5 days after the ascent I thought about the grade I'd suggest. My own personal dilemma: is it 9b or just hard 9a+? In the end I just couldn't avoid the slashgrade, I suggested 9a+/b.

So last year's project has now been freed. How do you choose the routes you'd like to climb.
I usually choose my climbing objectives a year in advance. I make a list of the routes I'd like to climb - more than I am capable of - and then I try to tick as many as possible. Super Marina was the most important project for 2009.

We know you've got other objectives too, such as the World Cup Difficulty...
I'm not the kind of person that would say to everyone: "I am going to win!" I can only say that I will try to do my best. Of course my motivation to climb 1 kilometer from home in the World Cup is huge.

Does this mean you also train specifically on plastic?
For competitions I train my endurance, doing circuits on the bouldering wall or if I can get to Prague, I climb with rope. It's very important to get used to feeling artificial hold under my skin. I usually train indoors during the last two weeks before a World Cup, while at the weekends I climb outdoors, on rock.

Talking of which: up till now we've seen you above all on hard bolt routes. What do you think about trad?
I am motivated to try some trad climbing, but I would not go for dangerous routes with very bad protection like on gritstone for example, instead I'd prefer the cracks in Yosemite which can be protected well. I like the idea of making the ascent and leaving the route just as it was before. On-sighting a trad climb must be really exciting, the fact that you do not know what will follow really thrills me. Oh, but it's useless to type about this when I still haven't learnt how to place a cam properly...

We're certain you'll learn very quickly indeed! Tell us something: do you realise that you have become one of the most followed climbers in the world? What effect does this have on you and your climbing?
I try not think about it and I try to have the same fun as I did when I started climbing. And I think I'm still successful at this. I'm as mad about climbing as I was 8 years ago. My passion hasn't changed a bit!