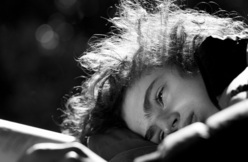 Adam Ondra on a rest day...
Photo by Vojtech Vrzba 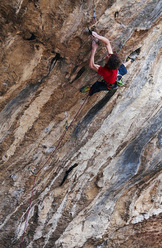 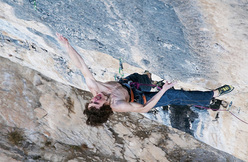 Interview with Adam Ondra after his repeat of Chilam Balam 9b, the route claimed by Barnabé Fernandez in 2003 at Villanueva del Rosario, Spain.

The news today could hardly be bigger: Adam Ondra has repeated Chilam Balam, one of the longest, hardest and most disputed sport routes in the world. The first ascent of this 80m overhanging marathon located at Villanueva del Rosario had been claimed by Barnabé Fernandez in 2003 and at the time the Spaniard put forward the audacious grade of 9b+, a fact which, to put it lightly, raised many an eyebrow. Ondra made lightening fast work of the line and repeated it yesterday in a mere three days, downgrading the route to 9b.

9b in just three days... it would be nice to concentrate only on this remarkable achievement, as the speed with which Ondra dispatched the line is literally mind blowing. And a clear demonstration of the remarkable physical fitness and nigh invincibility of this athlete on rock where, when the intensity eases off even just for a second, he manages to rest and fully recover, poised for the next section.

It would be nice to just celebrate Ondra's repeat and, consequently Fernandez's first ascent, but this would be ignoring the obvious, namely the history of the line which is shrouded in mystery. Because, rightly or wrongly, Chilam Balam has been hotly contested right from the outset because of its grade - 9b+ represented a quantum leap forward on almost all other existing routes in 2003 - and because of other important details, such as Fernandez previous track record which, despite being impressive, didn't suggest this be possible.

But stranger things have happened and it has to be said that, at times, climbing is a funny old game. While not wishing to take a stand, we like to believe that like in other sports, ground-breaking records are at times possible. Jessie Owens for instance leaped into time, space and history with a jump that remained unbeaten for a staggering 25 years back in 1935... the example may be not be the best, but it perhaps provides food for thought that a redpoint a notch above the rest, after a massive three-year siege, might just be feasible. Especially if it turns out to be 9b, and not 9b+.

Obviously Ondra's recent repeat does nothing to either confirm or crush the doubts and no one, bar Fernandez himself, will ever know the truth. But one thing is certain: Fernandez's vision was outstanding, his route a true beauty, incredibly difficult and... there to be climbed!

ADAM ONDRA AND CHILAM BALAM
Hi Adam - how do you feel this morning?
Excellent, it's like I'm living in a dream!

Tell us about this dream...
Well, I tried the route for three days in total and some of my attempts were spent specifically working the hardest section at the end. I had planned to just work the route on the third day because of this really hard boulder problem finish and so I originally just wanted to work it to get the section really wired. So I tried it once but then I felt pretty strong and I realised that there is probably no better solution for the top, and so I decided to give it a go... and sent it!

80m long... how much time did it take?
I'm not sure exactly, but somewhere in the region of half an hour.

Much to your own surprise?
Yes, when I set off I gave myself a 1% chance that I might send it. I knew that the route was possible, it was just a question of time and in truth I had expected to put in much, much more time. If I hadn't been so lucky, it might have taken me far longer because the top is really hard.

Can you describe it?
There are two underclings, the footholds are bad, you need to be fast and at the same time really precise and the move that follows is really powerful. I was really lucky that I didn't fall there and I couldn't believe that I latched the two-finger pocket because I was so pumped. But I did.

I read you'd originally planned to try it with Chris Sharma
Yes, but unfortunately he couldn't make it because he had other commitments. So I went with my dad and when I sent it there were pehaps 30 other people, some were climbers, others were just people from the village who came to watch!

What do you to think about the grade?
I think it might be a normal 9b, maybe even a low-end 9b, but definitely not 9a+. It's not the hardest route I've ever climbed and Chaxi Raxi is probably harder. My ascent obviously proves nothing about Fernandez's ascent, it just proves that the route is climbable, beautiful and there for people to try!

If you assume Fernandez did do the route, that would mean 9b in 2003
That would certainly be an incredible achievement!

The question may sound silly: why did you travel all the way for this route?
Well it's obvious really: I wanted to find out more about the route for myself, it's an ultimate challenge, ins't it?

And are you running out of challenges?
Maybe I'm running out of challenges when it comes to repeating routes, but I've got many first ascents to do on existing projects or lines which still need bolting.The potential here in Andalusia is amazing, it seems like there is even more to do here than in Catalonia! It's incredible, the cliffs are so massive, some haven't even been bolted. I don't think I'll get bored!