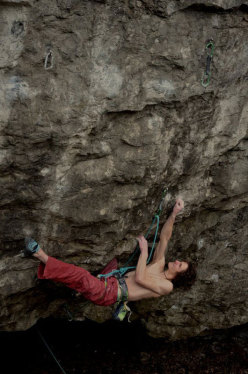 Adam Ondra climbing the crux move of his Vasil Vasil 9b+ at Sloup in the Czech Republic
Photo by archivio A. Ondra 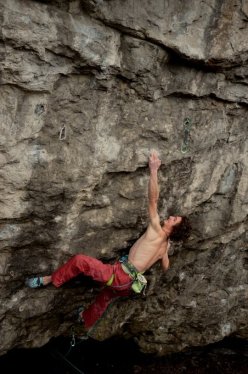 Adam Ondra climbing the crux move of his Vasil Vasil 9b+ at Sloup in the Czech Republic
Photo by archivio A. Ondra

Adam Ondra and Vasil Vasil, the third 9b+ interview

Interview with Czech climber Adam Ondra after his first ascent of Vasil Vasil 9b+ at Sloup in the Czech Republic. This is Ondra's third 9b+ after Change and La Dura Dura.

"Hi, sorry, do you mind calling me back a little later? I'm driving at the moment."
"No problem Adam... speak to you later!"

We put down the phone, pleased we'll be able to find out more. These are the facts: Adam Ondra has just done another 9b+. His third this hard. And he's just done so at a small, relatively unknown crag close to his home in the Czech Republic. On hearing this news many might simply take note and move on. Shrugging it off as just another great little number that Ondra has got them so used to, they're almost bored. But this, we feel, would be a mistake. For what happened the other day isn't simply confirmation of Ondra's strength or yet another super route, but an absolute, world-class performance. Full stop. No point denying it. Ondra's track record of 9b+ climbs has no equals and the only three this hard are all his. Climbed in the space of just 14 months. As such this latest creation deserves careful analysis and attention to details. Firstly: Vasil Vasil stands in apparent contrast to recent tendencies of routes necessarily becoming longer and longer in order to become harder and harder still. For while La Dura Dura (the only one to have been repeated so far, by Chris Sharma) is circa 40 metres high and Change a staggering 55, Vasil Vasil explores a mere 12 metres of rock before reaching the top of the crag. Secondly: locked within those 12 metres there's one move, so remarkably heinous, that it shut Ondra down for a full three years. And thirdly: the route is located at Sloup, hardly a sought-after destination on the world climbing map. But about an hour's drive from Ondra's home and ideal therefore for a hard, damn hard project. These are the first three things that spring to mind... but now it's time to get on the phone and find out more.

"Hi Adam. Better now? Yes? Where should we start? With the thing that struck us first: this route looks so different in style compared to the other 9b+. Short and sharp instead of something much longer"

Yeah, I suppose it may look like it, but in the end the style of this route isn't that different from La Dura Dura. Actually it's quite similar really, with a bouldery beginning of about 15 moves that lead to a difficult crux. The difference though is that after the crux on La Dura Dura there are some still quite hard sequences to reach the top. On Vasil Vasil the crux is harder, but then it's basically over, a few 6a moves to the chain.

With one really hard crux move, it sounds similar to Ben Moon's Hubble at Raven Tor in the UK...
Hmmm, the rock is kind of similar I suppose, but Hubble is really a boulder problem reached after about 5 moves or so. Vasil Vasil feels more like climbing a route, the entry section is longer and you need to get to the crux really fresh otherwise you just don't stand a chance of doing it.

About French 8b just to get to the crux?
Yes. Since I could do the crux move on its own, I thought I'd manage the redpoint fairly quickly. But I hadn't realised that climbing those 15 moves beforehand would make such a difference. It just made it all so much harder.

Then there's the 8B+ boulder section. Can you break that down for us?
The crux is about 4 moves long, but in those 4 moves there's one in particular which is the worst of all: a tiny, sharp 2 finger crimp, heel hook left and big move to a slopey pinch. Terrible,

Conditions dependent?
Totally! It's got to be completely dry of course and that's the problem: it's hard to find. Cold air from inside the cave condenses when it meets the warm air outside making the hold moist and impossible. After a while I realised I needed to go when there's no temperature difference between the two.

Which explains why you sent it at this time of year. In truth we couldn't understand how come such a hard route in winter in the Czech Republic and not in sunny Spain for instance.
Yes, this is the prime time to try this route. No warmer than 5°C, no colder than -2°C. In fact, the day I sent it it was even colder when I arrived at the crag and so I thought I'd just call it a day. Somehow though I managed to warm-up and send it. My fingers went numb right after the crux. A perfect moment. Everything just clicked into place.

Something you'd been waiting for a while!
I bolted it 5 years ago and tried it on and off. I did the crux move for the first time 2 years ago and thought it would go pretty fast, but as I said, I hadn't reckoned with how hard it would feel on the actual link.

You said that after that move it's all over.
Yes. But funnily enough, last Saturday after a local competition and on my third day on the route I fell just after the crux! So I knew I was close. That evening I injured my ankle though at the comp and this forced me to take two rest days, and after another good attempt and further rest day I finally sent it first go!

Last question: tell us about this piece of rock
Well, if you look at it there's nothing impressive about it really. But for me it had something special. The crux looked horrible, impossible actually. It fascinated me. And so I simply couldn't leave it unclimbed!