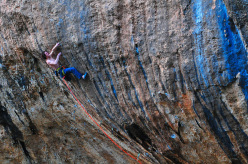 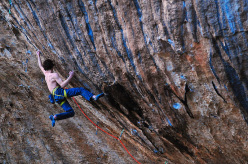 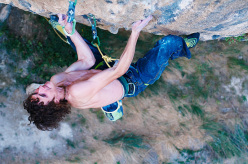 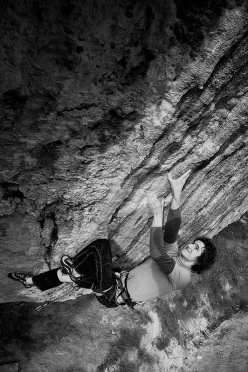 Interview with Adam Ondra after his repeat of First Round First Minute, the 9b sport climb freed by Chris Sharma at Margalef, Spain.

Late yesterday afternoon Adam Ondra successfully made the first repeat of First Round First Minute, the hardest route at Margalef in Spain and, as it happens, also one of the hardest sport climbs in the world. FRFM was established in 2011 by Chris Sharma after a supreme battle against both the intense difficulties of this 25-move line and the psychological complexities of failing at the crux more than 50 times. Even though Sharma chose not to give the route a grade, First Round First Minute was believed to be somewhere in the region of 9b and Ondra has now confirmed this difficulty. For the record, this should be the 12th 9b (or harder) for the 20-year-old from the Czech Republic who, tomorrow, will celebrate his 21st birthday. And FRFM is only the 5th route in the world this difficult to be repeated after Golpe de Estado at Siurana, Chilam Balam at Villanueva del Rosario, Fight or Flight and La Dura Dura (9b+) at Oliana.

Adam, did you travel to Margalef and Spain with this in mind?

Not specifically. No, I came to Spain mostly for the pleasure of climbing on rock, to relax. Of course I had this in mind and it's nice to climb something hard, especially since this has now taken the pressure off things and I can now enjoy the rest of the stay even more.

If we're not mistaken you'd tried the route before, right?
Yes, I first tried it for two days in 2011, but it was summer and simply too hot. I returned for a day in winter 2012, and then I spent another two days on it last November. I returned now and after a week I finally managed the send.

So tell us about this week
Well, conditions were really bad when we arrived but I was so motivated I jumped on it as soon as I arrived and, despite some holds being wet, I just kept trying. I was just too psyched! There's an essential hold right at the start that kept seeping, and although I could do the move, it being wet made things awkward for the moves higher up. When this eventually dried out it made all the difference.

25 moves. That's pretty short and intense!
Well let me put it like this: it's pretty short - or pretty long - it just depends on how long you manage to stay on! It definitely felt like a route, with the crux at the very top. While the individual moves aren't that extreme - say 7C boulder at the top - having those 20 moves below obviously makes it feel a lot harder.

You almost sent it the day before...
Yes, I almost sent it on my third go on Sunday evening. This really surprised me as I didn't think I'd do so well on my third attempt. Certainly a good confidence boost! So I waited yesterday as I expected it to be the driest after it had received the sun all day, and then I sent it first go.

How long did you battle?
About a minute and a half, I reckon. Perhaps 2 minutes in total to clip the anchor. After the crux there are 5 easy moves to reach the top.

Which you really savoured?
Well no, not really. Those moves were more thrilling than expected. I almost panicked because I hadn't climbed to the top many times, it was pretty dirty and I was worried I'd mess things up. Luckily I didn't.

Chris really battled against this route and the demons inside, so much so that he preferred others to give it a grade.
Yeah, I can really understand this. When he first tried it he was using a much harder beta, and fell off that last section about 50 times. He eventually worked out an easier sequence and then sent it relatively quickly, but when you try something for so long it's hard to get a proper feel for things. I used that easier beta, too, and I'd say 9b fits perfectly.

Now it's time to return home
In a week. Then I'll start training for competitions. As you know, this year I'll be taking part in all the Lead competitions, and also the occasional Boulder comp as well. But now I'll finish eating and then I'm off to the crag. For some climbing and relax!