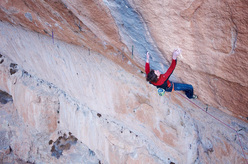 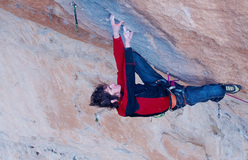 On 13/03/2010 Adam Ondra from the Czech Republic repeated Golpe de estado 9b at Siurana, his hardest climb to date.

Last week the news spread like wildfire across the climbing globe: Adam Ondra sent "Golpe de estado", Chris Sharma's masterpiece at Siurana. The reason why this news stood out from the crowd is manifold, for not only is this Ondra's hardest route to date - signalling a further step forward in the quality of his climbing - it is also the first time a 9b has been repeated and confirmed.

Golpe de estado was freed by Chris Sharma at the end of 2008 and climbs a direct start to Estado critico, established by Ramón Julián Puigblanque in 2004. Ondra worked hard to clinch this route and poor weather and a slight injury definitely did not help ease the mind-boggling difficulties of this route.

Infact, Ondra needed a (for him staggering) 29 attempts to repeat the line, proving that the leap from 9a+ to 9b is immense. He commented "It was psychologically very demanding for me to try something for such long time, especially since I knew I was quite close to the send on the 2nd or 3rd day. But the moves on the crux are very insecure, requiring to do everything very precisely. So I kept falling, on some days the wind blew so hard that I gave up after first try. Then I got injured, spent time getting back into shape at home, this was followed by flu, then I had to get back into shape in Siurana, then it snowed and only I had a few days left to send it. It was really stressful. But it is part of challenge."

Ondra also had to fight past a slightly tougher upper section as a hold snapped up high. "Yes, a broke in the upper part, where the route is common with Estado Critico, the crux is the same as Chris did it." Ondra stated, adding "It used to be quite a good crimp, with this you grabbed a sidepull and made dyno to a good pocket. Now you have to go directly to the sidepull from a low Egyptian and you never quite get in the right position for the dyno. Estado Critico is now significantly harder, from 8c+ it must 9a. If Golpe de Estado is significantly harder is difficult question. I had been really worried about this move, considering it is the only move where I can fall in the part they have in common. I fell up there once, surprisingly though on even higher terrain which is not so difficult, because I was pumped as hell and made mistake. The move itself felt easier while linking than normally while working. I would say the following - it was probably 9b before too (just as Chris proposed, although maybe soft), but now it is 100% 9b."

As to why he decided to invest so much time and energy in this route, Ondra cooly replied "That's a simple question - because it is 9b! I wanted know what this grade felt like, so the obvious thing was to go and repeat one of Chris' routes. How did it feel? Freaking hard!"

Congratulations are in order to Ondra obvioulsy, and also to Chris Sharma for this massive 2008 first ascent which, together with Neanderthal 9b at Santa Linya and Jumbo Love 9b at Clark Mountain, California, proves why the American continues to be one of the absolute driving forces in establishing cutting-edge sport routes worldwide.