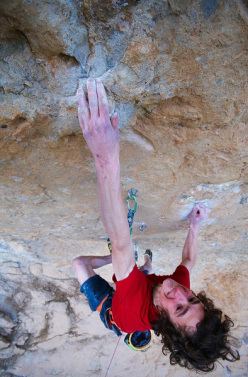 Last Friday at Villanueva del Rosario, Spain, Adam Ondra made the first ascent of La planta de shiva 9b. A day later at Achidona he climbed three 8c's in a single day.

"It was an incredible fight, and I had some incredible fun." That's how Adam Ondra described his last day in Spain when at Achidona close to Malaga he on-sighted not just one route in a day, and not just two like he did a month ago, but a staggering three! Add to this the fact that the day before the Czech climber managed to free a 9b at Villanueva del Rosario, then you can easily understand why every time the expressions super performance and new standards are used, they are practically already out-of-date!

For those who don't remember it, Villanueva del Rosario is that immense cave which hosts Chilam Balam, the 9b repeated by Ondra on 13 April. Just a few meters away lies La planta de Shiva, another 40m project bolted by the local climbers comprised of a 20m 8c which leads to a poor rest, and a further 20m of climbing with no rests at all to the top. Ondra failed to resist and he "started trying it the very same day I sent Chilam Balam, and finally freed it after 7 days in total".

Compared to the 80 plus meters of Chilam, La planta de Shiva might almost seem like a walk in the park. Not so, says Ondra, who explains: "the route is shorter but is much more pumpy. In Chilam Balam there are many rests, here though I needed to sprint all the way up and the holds are really small with some awkward moves so I needed to be precise and I had to concentrate hard on being efficient. When I did it I got close to my limit."

Close to your limit we asked, and Ondra replied "Yes, it was an incredible fight" to which he added "To tell the truth I don't think I've reached my complete limit, but in order to climb 9b+ I'd really have to dedicate much, much time to a route."

So how do you plan to invest your time now was the next question "I'm really pleased to have travelled to Andalusia because I've discovered more about the huge potential here, possibly even bigger than in Catalonia. But for the time being I'm not planning on returning to Spain" Ondra explained, stating "I now need to concentrate on the World Championship in Arco in July. The routes in competitions are very different compared to those on rock, there are never any rests and what I'm lacking is some real endurance." Well, with five 9b's to his name, we'll just have to take his word for it...