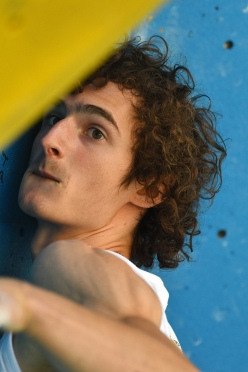 Adam Ondra 9b first ascent and 8c+ onsight in Slovakia

Interview with Czech climber Adam Ondra who on 05/10/2016 at Alternativna stena in Slovakia made the first ascent of 'Robin Úd', a 9b sports climb, before on sighting the 8c+ 'C'est la vie'.

On 5 October Adam Ondra from the Czech Republic nipped across the border into Slovakia and made the first ascent of Robin Úd, an old project at the crag Alternativna stena. The route contains about 30 hard moves and after just one attempt in 2014 and a further four days this autumn, Ondra successfully clipped the chains to suggest an overall difficulty of 9b, This means that Robin Úd - excluding his three 9b+ first ascents - is Ondra’s 7th first ascent of this difficulty. As if freeing a 9b didn’t suffice, with the day still young he then promptly onsighted "C'est la vie” nearby. Graded 8c+, Ondra’s is only the second ascent in the route’s 15-year history.

Adam, what can you tell us about Robin Ud? Is this your creation? Or does it perhaps it has a long history we know nothing about?
The route was bolted roughly 20 years by local climbers Maros Skvarka and Juraj Podebradsky, which was definitely a very visionary feat at the time. They found the absolutely perfect line.

What makes it so difficult?
The route is extremely physical and athletic at the beginning, with very little rest in between the bouldery sections. Because it is so physical, even though the individual moves are not so crazy, it is hard to keep the body tension the whole way. After 20 moves and little rest you enter the linking crux of the route, which is less steep but revolves around two tiny sidepulls. Extremely crimpy and core oriented at the same time.

This may sound silly but: how hard do you find 9b?
Hard. It takes at least a couple of days of work, and I have to be focused and in extremely good shape.

Later that day you also onsighted an 8c+.
C'est la vie onsight was even more satisfying. It was the first 8c+ in the Czech Republic or Slovakia, put up 15 years ago by Pavel Koran and still without a repeat. It’s quite a legendary route and I had been waiting for a long time to feel ready to give it a good try. It was a hard onsight, with some tricky moves and minimum chalk.

So yet another difficult first ascent in a foreign country...
Well, Slovakia is almost not a foreign country, we do not really feel like that. The two countries still feel like "brothers". And this place is only 1 hour and 20 minutes drive from my home.

This is your 7th 9b first ascent, your 12th 9b, to which one has to add your three 9b+ first ascents - the hardest sport climbs in the world. How motivating are grades Adam?
I like interesting moves and impressive lines. Ideally I find both in one single route, but if there is only one of these factors, then that’s OK as well. Grades are there to help me decide which route to try, namely the route which will be challenging - ie. fun. Climbing well below my limit all the time is not fun.

You’ve just landed in America. What can we expect?
This is actually my 4th time in the US, but my first time in Yosemite. The only goal of this trip is the Valley and El Capitan, where I’ll try to climb a few interesting routes on the big stone.