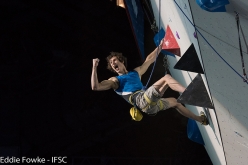 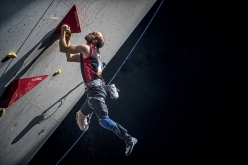 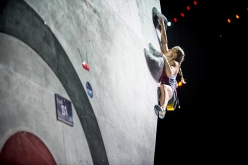 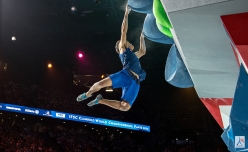 France’s capital city hosted the biggest sport climbing competition of the last two seasons last week and the climbing that was put on display, across all disciplines by the 386 Athletes from 53 countries, was nothing short of spectacular. Here’s our round-up of the action which, if this World Championship is anything to go by in the run-up to Tokyo 2020, demonstrates that sport climbing well and truly deserves its place as an Olympic sport.

BOULDERING
The atmosphere in Paris was electric and rendered even more charged with the inclusion of three French athletes in the Men’s Bouldering finals. Japan’s Tomoa Narasaki came out first and immediately put his rivals under immense pressure by sending boulder #1 on his third go. His teammate Tsukuru Hori got it 6th go and France’s Manuel Cornu required 7, but Mickael Mawem and Jeremy Bonder then dampened French spirits by failing to make any headway whatsoever. After some initial tribulations, Adam Ondra sent it 5th go. Cornu and Mawem got back in the running by being the only athletes to send boulder #2, but Narasaki steered clear of the pack on boulder #3 on his second go. Only Ondra managed to keep up, but Narasaki proved absolutely unstoppable on Saturday night, producing an insane flash across the long, overhanging, dynamic traverse and delicate finish on boulder #4. The 20-year-old winner of the Bouldering World Cup 2016 fully deserved the World Championship title, as Ondra settled for 2nd place, ahead of Manuel Cornu, 3rd. Mickael Mawem finished 4th, Jeremy Bonder 5th and Tsukuru Hori 6th.

The Women’s Bouldering finals will be remembered for the tears of joy shed by surprise winner Petra Klinger. The 24-year-old Swisswoman had only won an international competition once previously and she rose to the occasion, producing the climb of a lifetime just when it mattered most. Klinger clinched victory on the last boulder problem and ousted Japan’s Akiyo Noguchi who had dominated standings until then. The Japanese’s failure on the last problem cost her dearly, as her teammate Miho Nonaka slipped into second to win silver, ahead of Megan Mascarenas 4th, Anna Stöhr 5th and Elena Krasovskaia 6th.

SPEED
The Men’s speed on Saturday proved breathtaking, literally, with Poland’s Marcin Dzienski clocking up the staggering time of 5.83 in the final race against Iran’s Reza Alipourshenazandifar. The small final for third and fourth place was won by Aleksandr Shikov from Russia, who beat crowd favorite Bassa Mawem from France.
The Women’s Speed on Sunday, shortly before the Male Lead Grand Finale, looked like it would have it’s fairy-tale ending: France’s Anouck Jaubert, winner of the Speed World Cup 2015 and currently world #1, had qualified for the decisive race against Russia’s Anna Tsyganova. A few minutes earlier the Frenchwoman had slipped but nevertheless beaten the fastest woman on the planet, Russia’s Iuliia Kaplina, who was forced to beat Poland’s Aleksandra Rudzinska and settle for bronze, and the 8000 spectators fell into complete silence as they waited for the French dream to come true. The buzzer rang and Tsyganova on the left and Jaubert on the right shot upwards, in perfect sync, one hold after the next. Jaubert appeared to be ahead but then, 5 meters from the top, Tsyganova powered past to clinch gold and win her second, mighty gold medal after winning the European Championships in Chamonix in 2013. Tsyganova won in 7:52 seconds, while Jaubert gracefully accepted silver after 7:97. For the record, had Paris been a certified wall, Tsyganova would also have beaten the world record by 1 hundredths of a second…

LEAD
The Women’s Lead on Saturday was a battle of titans and anything but gentle. Immensely powerful moves past burley slopers proved fatal for four athletes, namely Alina Ring, Magdalena Röck, Claire Buhrfeind and Julia Chanourdie who all fell relatively low, and it took Jessica Pilz to first break through this crux section before falling heartbreakingly high, off the penultimate hold. Anak Verhoeven then powered her way convincingly to the top, while Jain Kim and then Mina Markovic both fell off the penultimate hold. Last out was 17-year-old Janja Garnbret who has proven practically unstoppable in her debut season and, once again, she stole the show. The Slovenian topped out like Verhoeven and won on count back to the Semi-Finals, where Verhoeven had climbed two holds lower. So gold went to Slovenia by the smallest of margins, while Verhoeven took silver and Mina Markovic took bronze, once again due to count back to the Semis. Jain Kim placed 4th, Jessica Pilz 5th, Julia Chanourdie 6th, Magdalena Röck 7th, Claire Buhrfeind 8th.


The Men’s Lead route has been defined as one of the best routes ever in a Lead Final and this coordinated bouldering on a rope, past highly committing moves with no chance for second-go’s, proved as spectacular as it was ruthless. After having been allowed to preview the route, Japan’s Keiichiro Korenaga got the men got underway with a great display of acrobatic power. Italy’s Stefano Ghisolfi climbed to his absolute max and when he fell, he knew he had produced an outstanding performance. Ramon Julien Puigblanque fell unexpectedly, after a mere 9 holds on a dyno left as he went for a part of the hold non of the other competitors used. Next out Sean McColl had absolutely no problems whatsoever as this climbing seemed to suit his style perfectly, but then powered out just one hold higher than Ghisolfi. France’s Desgranges got one hold higher still, then Jakob Schubert powered past - despite fumbling a clip - to add a massive 4 hold lead. Cheered on by the deafening home crowd Supper climbed one hold lower and into provisional second place. Current World Cup leader, Slovenia’s 22-year-old Domen Skofic, seemed undisturbed by the route’s intensity, but as he reached Desgranges highpoint his elbows suddenly turned and he lobbed off. Last out was Adam Ondra, the defending World Champion, intent of improving on his silver medal he had secured in the Bouldering event the previous day. And Ondra put on the show of his life, quickly reaching Schubert’s highpoint. Even the Czech struggled with those fateful tiny crimps but somehow he turned and stuck an impossible looking dyno. As he landed he instantly knew he’d done it, he turned and screamed in joy and cheered to the spectators who rose and went wild, absolutely wild in Paris. Domen Skofic placed 4th, Romain Desgranges 5th, Sean McColl 6th, Stefano Ghisolfi 7th, Keiichiro Korenaga 8th, Ramón Julian Puigblanque 9th.

PARACLIMBING
20 countries were represented in the Paraclimbing World Championships and for many of the 8000 strong crowd this was a first, touching insight into the extraordinary world of very special climbers. An absolute hush fell over the stadium as coaches communicated via radio with the visual impairment athletes, and later as the amputee athletes fought their ways up the wall the spectators screamed in appreciation and granted them a standing ovation.