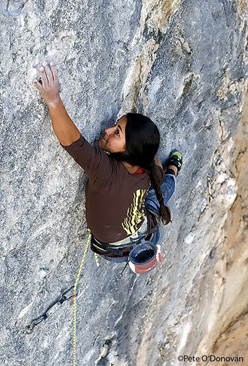 Daila Ojeda during the first ascent of "China Crisis" 8b+, Oliana, Spain
Photo by Pete O'Donovan

A few days ago we reported about some top action in Spain. Well, much has been going on in these 48 hours, mainly in one of the other new hotspots, Oliana close to Lleda, where in a fantastic effort Adam Ondra from the Czech Republic made short work Papichulo 9a+. This 45m stamina fest was first climbed by Chris Sharma in May 2008 in preparation for his Jumbo Love at Clark Mountain.

To tell the truth, Ondra amazed all even before entering Spanish territory, when he stopped off at the Franch winter crag Seynes. Oon Saturday 21 February he on-sighted a couple of 8b's, before dispatching the reference route "La métaphysique des tubes" 8c same style. Impressive to say the least. Who know what he found harder, the 9a+ redpoint or the 8c onsight? And while we're on the subject of hard routes and Oliana: yesterday Daila Ojeda, one of Spain's premier female climbers, carried out the first ascent of "China Crisis" 8b+.

Talking about crisis: Margalef seems to be having some slight access problems due to irrespective behavior and Jordi Pou, the owner of the local refuge and climber who first discovered the area's potential in 1996, has sent us the following email with request for publication:

"Dear climbers,
please remember that Margalef is located in a natural park and that all sectors are on private property. There have been some problems recently and although climbing is still possible, if there are other problems in the future some sectors may be closed. Garbage and excrement littered around the car parks, roads and paths put us climbers in a position which leaves much to be desired. Please do not park at the entrance to the olive groves or within them, and take all trash and toilet paper with you. Thank you."

Sounds like, once again, the future is in our hands and that we need to work hard on our collective climbing attitude.