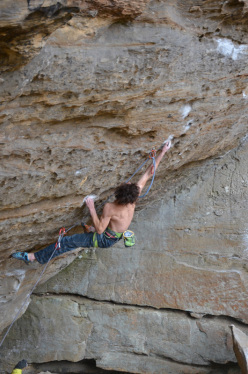 These are intense days for sport climbing. Important days, in particular at the American crag Red River Gorge which - completely by chance but almost as if it were some sort of international climbing meeting - is currently hosting an impressive number of strong climbers who are achieving some extraordinary ascents, some of which might even help redefine the limit of what is currently possible.

This autumn the Kentucky crag has been visited by the likes of Italy's Jacopo Larcher (who onsighted Omaha Beach 8b+), France's Melissa Le Nevé (who repeated Transworld Depravity 8b+), tireless Swissman Cedric Lachat (who checked in with a fast repeat of Pure Imagination 9a) and the Americans Jon Cardwell (50 words for pump 8c+) and Daniel Woods (Southern smoke, 8c+) to name just five of the numerous climbing stars.

In some respects though all these ascents pale in comparison to those of two other stars to have hit "the Red", namely Ashima Shiraishi and Adam Ondra who really do seem to be a hurricane of pure talent mixed with unlimited power and immense stamina. A few days ago the young New Yorker redpointed Southern smoke and Lucifer and these aren't merely the young boulderers first 8c+ (as they were for her compatriot Sasha DiGiulian), they are also obviously the best performance to date of any young girl (or boy) who is... a mere 11 years old! In short: after sending 8B boulder, Shiraishi has now redpointed an 8c+ sport climb... What this means is still unclear and only time will tell, but perhaps the title "The future is here" by US magazine Rock & Ice isn't too far off the mark.

Another who has always and unconditionally raised the bar is Adam Ondra and the biggest talk at the Red is about his latest performance, i.e. Southern smoke direct 9a. Freed by Adam Taylor in 2011, as the name suggests this the direct start to Southern Smoke and this 9a (ex 9a+) has now been flashed by Ondra, using the beta given to him by... well, we'll let you read his own words of the world's hardest flash.

I had the beta from Daniel Woods, Jon Cardwell and Cedric Lachat and I think the general consensus is 9a. The route was an incredible fight, I had the beta for the first boulder problem, which I climbed without any mistakes as I fought my way through this Font 8A+. The route then joins with Southern Smoke and I didn't know much about this section, but I had about five people underneath who knew the route really well. There were such good vibes from them as they encouraged me and so I just kept climbing. Towards the end I simply ignored the lactic acid, the fight got tougher and tougher, but I didn't let go... My personal grade is definitely 9a (5.14d). Yes, I'm living the dream indeed.