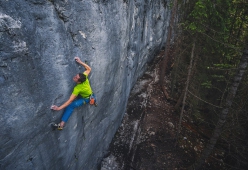 Adam Ondra making the first ascent of the 9b slab Disbelief at Acephale in Canada.
Photo by Petr Pavlicek 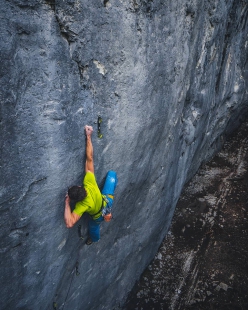 Adam Ondra on the crux move of the 9b slab Disbelief at Acephale in Canada.
Photo by Petr Pavlicek

Adam Ondra convinces his Disbelief 9b in Canada

25-year-old Czech sports climber Adam Ondra has freed a 9b slab, Disbelief at the sports crag Acephale in Canada.

One of Adam Ondra’s principle traits is his unwavering belief in his own abilities, but even the 25-year-old was beginning to doubt whether the open project at Acephale in Canada was feasible. The moves on the tiniest crimps were simply too "low percentage" up the "vertical wall with almost no holds" and, to make matters worse, Ondra had broken a crimp making the crux sequence even harder.

As reported, at the same crag Ondra ha onsighted the 8c+ First Flight, a lifetime’s achievement for almost everyone, but the main goal of the trip had been this project or a repeat of Fight Club, the 9b freed by Alexander Megos at Ravens Crag in 2016.

With a mere 4 days left before his return flight to Europe it seemed as if he’d return home - to the Arco stage of the Lead World Cup 2018 to be precise - empty-handed, so to speak. But appearances can be deceptive and yesterday against all expectations Ondra managed to remain stuck to the wall, his foot didn’t slip off the hold and he incredulously clipped the anchor, hence the name of the route Disbelief. "I cannot think many other routes where I climbed so close to my limit" was Ondra’s concluding though. Not bad for a 9b slab!

"Disbelief" 5.15b (9b), probably upper end of the grade. Acephale, Canmore, Canada. It was a crazy day. I almost wanted to give up. After two tries, when I got to the crux move (which is actually a foot move) totally fresh, I would slip off for like 15th time. No light in the end of the tunnel, despite the fact I stuck the move 10 days ago once, only to fall off 2 moves higher. On my 3rd try of the day, I somehow did not slip and did bot fall. I cannot think many other routes where I climbed so close to my limit. @blackdiamond @mytendon ,@lasportivagram @montura_official @gardatrentino @bernartwood

14.11.2017
Unstoppable Adam Ondra adds new 9b to Arco, Italy
Adam Ondra has made the first ascent of One Slap, a new 9b sports climb at the crag Laghel close to Arco. This is the second 9b in Arco and the third in Italy.