► News ► Climbing ► Adam Ondra and Silence, the film about climbing into the future
Versione italiana 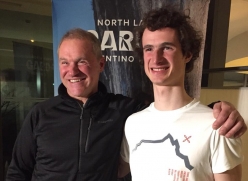 Jerry Moffatt and Adam Ondra at Riva del Garda, Italy, during the world premiere of the film Silence directed by Bernardo Giménez
Photo by PlanetMountain.com

Adam Ondra on 3 September 2017 making the first ascent of Silence, the hardest sport climb in the world and the first ever to be graded 9c.
Photo by Bernardo Giménez 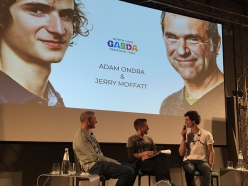 Jerry Moffatt, Simone Raina and Adam Ondra at Riva del Garda, Italy, during the world premiere of the film Silence
Photo by PlanetMountain.com

PORTFOLIO / gallery Portfolio: Adam Ondra and Silence, the film about climbing into the future

Adam Ondra and Silence, the film about climbing into the future

The film Silence featuring Adam Ondra and the world’s first 9c freed in autumn 2017 by the 24-year-old Czech climber at Flatanger in Norway. The path that led to the most difficult sports climb in the world documented by Bernardo Giménez, premiered yesterday by the Garda Trentino.

Silence needs no introduction. It is the first climb in the world to have been given the grade 9c. It is therefore - by a long way - the most difficult sport climb route on the planet. And it is also the most important route of all for Adam Ondra who, on 3 September 2017, managed to crown months of attempts at the Flatanger crag in Norway.

The intense, particular and at times even painful journey towards this highly ambitious, apparently impossible goal is documented in Silence, the film directed by photographer and director Bernardo Giménez that premiered last night at Riva del Garda, Italy. For the occasion, Adam Ondra was joined on stage by legendary British climber Jerry Moffatt who during the late 80's and early 90's was widely recognised as one of the best climbers in the world.

Ondra explained that Silence is such a fundamental milestone in his climbing career that he wanted to share it with everyone, from what he himself defined as the home of climbing, the Garda Trentino region of Northern Italy. Here is Ondra’s climbing manifesto, online for all to see.

23.02.2018
Adam Ondra live streaming of the Silence premiere at Riva del Garda
This evening at Riva del Garda, Italy, Adam Ondra and Garda Trentino present the world premiere of the film Silence. The path that led to the world’s first 9c will be explored by Ondra with legendary British climber Jerry Moffatt. Live streaming of the evening will be broadcast on youtube at 21.00-

14.02.2018
Adam Ondra and the world premiere of the film Silence at Riva del Garda
On Friday 23 February at 21.00 at Riva del Garda, Italy, Adam Ondra and the Garda Trentino will present a unique event: the world premiers of Silence, the film directed by Bernardo Giménez that documents the road that led to the world’s first 9c. Ondra will be joined on stage by another climbing legend, Britain’s Jerry Moffatt.