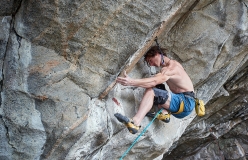 Adam Ondra on his Silence, the hardest sport climb in the world and the first ever to be graded 9c. On Friday 23 February the Czech climber will be at Riva del Garda, Italy with British climbing legend Jerry Moffatt for the world premiere of the film directed by Bernardo Giménez
Photo by Pavel Blažek 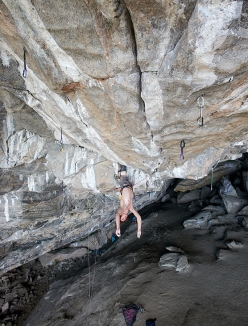 Adam Ondra resting with a knee-bar before one of the cruxes on Project Hard at Flatanger in Norway. The climb has three distinct boulder cruxes: 8c, 8B and 7C+. The route is now called Silence
Photo by Pavel Blazek 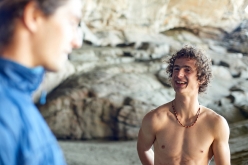 An extremely happy Adam Ondra after having made the first ascent of Project Hard at Flatanger in Norway. The route is now called Silence
Photo by Pavel Blazek 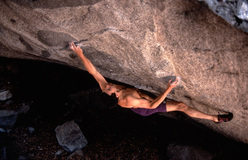 Jerry Moffatt making the first ascent of the Dominator, Camp 4, Yosemite in 1993.
Photo by Kurt Albert

On Friday 23 February at 21.00 at Riva del Garda, Italy, Adam Ondra and the Garda Trentino will present a unique event: the world premiers of Silence, the film directed by Bernardo Giménez that documents the road that led to the world’s first 9c. Ondra will be joined on stage by another climbing legend, Britain’s Jerry Moffatt.

Do you love climbing? If the answer is yes, save this date: Friday, February 23, 21:00 at Riva del Garda, Italy. This is the day, time and place of a unique and unmissable event. The evening’s undisputed protagonist is climbing. Climbing with a capital C. Climbing forged by passion, commitment, utmost difficulties. But also joy, projects, the desire to travel and dance between the rock and the sky. This special way of living and being will be recounted by an undisputed main player of this vertical world. By one of climbing’s greatest prophets: Adam Ondra.

There’s more though: the occasion is unrepeatable, because it happens to be the world premiere of a film that talks about a this steep world and about an absolutely unique performance: the first ascent of Silence or, put in other words, Adam Ondra’s story of the world’s first, immense 9c. An absolute milestone that acts as a watershed between what went before and what comes next. And if that wasn’t enough, there’s even more to come: wonder Ondra will be accompanied on this authentic journey into the soul of this stellar climbing by Jerry Moffat, one of the main players at the start of modern sports climbing during those legendary 1980’s, when everything began. And talking about beginnings, climbing and main players: it’s no coincidence that the world premiere takes place in Italy’s Garda Trentino, a region which since the early 1980s has also been one of the driving forces, also culturally, of sport climbing. And it is no coincidence that Adam Ondra is an ambassador of this outdoor paradise, that combines the deep blue sky with beautiful Lake Garda and the countless limestone outcrops that seem to be tailor-made for climbing.

So, two legends will be on stage at the Astoria Park Hotel in Riva del Garda, to talk about the beauty of climbing and the climb of a lifetime, the search for personal limits. Limits whose parameters and yardsticks have repeatedly been blown away by Ondra. On rock and in competitions.On single pitches, on multi-pitches and on boulder problems. There is no terrain, no performance that Ondra has not yet explored and left his mark. His climbing is all-embracing and knows no boundaries, apart from his passion and total dedication. And Silence, that silence that filled the air and his heart when he reached the chain of that historic first 9c, is a metaphor, a measure of greatness and a glance towards the future of climbing that still has to explore its limits. Adam Ondra, Jerry Moffat and this world premiere of the film Silence will surely help provide insight into all this. Don’t miss it!

Reservation: the evening is free of charge. Advance booking is obligatory for the coveted 200 places at the Astoria Park Hotel in Riva del Garda. Online booking opens on Thursday 15 February at 17:00 at: events.eventzilla.net

Streaming: The event will be transmitted in live streaming. The film will then be made available on Youtube

The Film (directed by Bernardo Giménez - 17 minutes)
What does it take to climb the world’s first 9c? Silence shows what preceded the afternoon of September 3, 2017 when Adam Ondra added an important chapter to climbing history with his first ascent of his huge project in the spectacular Hanshelleren Cave in Norway. The route, later named Silence, received a new grade of 9c and became the hardest route in the world.


The players:
Adam Ondra
(born in Brno, Czech Republic on 5/02/1993). Ondra is the climber who has changed the face of rock climbing, breaking a record number of grade barriers on all types of terrain. As a youngster he demonstrated his innate and amazing skills for climbing, and aged 10 he climbed his first 8a onsight. In competitions he has won the Lead World Championship twice, and the Boulder World Championship once. On rock he has bouldered up to 8C+ on various occasion, reaching therefore the absolute limit in bouldering, while on sports climbs in 2012 he became the first to break into the realm of 9b+. Five years later he achieved the unthinkable goal of freeing the world’s first 9c. Not one to rest on his laurels, a few days ago he made the world’s first 9a+ flash. No one has ever climbed a route this difficult on their first attempt. No one has ever climbed so many cutting-edge lines (single pitches, multi-pitches and boulders). And nobody represents the present and the future of climbing, and is a source of inspiration for all climbers, like him.

Jerry Moffatt (born in Londra, GB on 18/03/1963). Moffatt is one of the world’s true climbing legends. having lived through the early days of sport climbing between the 1980’s and 1990’s, Moffatt was recognised as one of the best climbers in the world. One of the first-ever pro’s, Moffatt the ‘dominator’ excelled in various disciplines and his boulder problems in America, his difficult sport climbs in Germany and in Great Britain and his dangerous trad climbs are all legendary. As are The Face in Frankenjura, considered the world’s first 8a+ and also Liquid Ambar in Wales, one of the world’s first 8c+. Even today, Moffatt’s climbs are a hallmark for quality and extreme difficulty.

Garda Trentino. The Garda Trentino region is an immense and splendid open-air gym, an essential destination for all outdoor enthusiasts. Sports climbing stands out, and the area is been recognised internationally as the "Home of Climbing". Quite rightly so, as the white limestone walls set between the the deep blue lake, the sky and the green olive trees make this a promised land for climbing. It is no coincidence that in the '80s these walls witness the birth of sport climbing. Since then the Garda Trentino has been a prime destination for climbers all over the world and proof comes from the Arco Rock Master, the oldest and most noble climbing competition and festival. This is an unmissable event for all climbers as it represents the history, culture and a climbing laboratory for the future. To learn more: www.gardatrentino.it/climbing