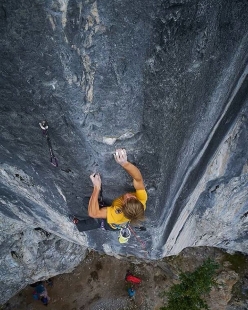 At Ravens Crag cliff in Canada German climber Alexander Megos has made the first ascent of Fightclub. Graded 9b, this is the hardest sport climb in the country.

Alexander Megos is currently on a rampage climbing trip in Canada where he has made the first ascent of the most difficult sports climb in the country, Fightclub at Ravens Crag in the Banff National Park.

The German climber was invited to North America by local strongman Sonnie Trotter who is not only acting as an excellent guide to the most beautiful and difficult crags in the area, but also as a highly proficient “route setter”; Megos started his tour by freeing a 20-year-old project at Ravens Crag and Trotter, which immediately realized that Megos was simply too strong for the existing routes, took a drill in hand and extended the route to its long, logical finish. "Yup, this will go. But it'll be hard" is what Trotter predicted.

During the following days the two visited other crags where Megos made a series of fast repeats up to 9a and also clinched a third go first ascent of Full Nelson (9a), thereby confirming the need for new challenges.

On August 14 Megos managed to free Fightclub after five days of work, watched by Trotter who described the moment as "The single most inspiring effort on the rocks I've ever had the pleasure of witnessing.”

Megos celebrated his 23rd birthday a few days ago and Fightclub is now the most difficult route he has first ascended and his second 9b, after repeating Chris Sharma’s First Round, First Minute at Margalef in Spain on 31/12/2015.