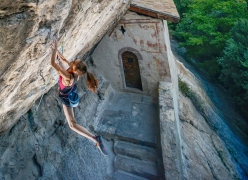 Laura Rogora making the first repeat of Erebor at the crag Eremo di San Paolo close to Arco. Graded 9b/+ and established by Stefano Ghisolfi in January 2021, it is considered the most difficult sport climb in Italy. This is the first time a woman has climbed a route of this difficulty.
Photo by Overchalked 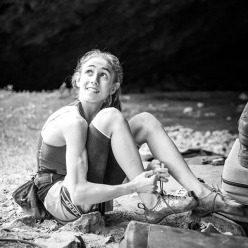 Laura Rogora preparing to climb Ali hulk sit extension total at Rodellar in Spain. In climbing this route she has become only the second woman in the world to climb 9b, after Angela Eiter
Photo by Marco Iacono

Interview with Laura Rogora after her first repeat of the 9b/+ Erebor at Eremo di San Paolo in Arco, Italy. With her It is the first time that a woman has climbed a route of this difficulty. Watch the uncut video of her ascent today at 16:00.

As reported, on Saturday 2 October Laura Rogora raised the bar of women's sport climbing with her redpoint of Erebor, a 9b/+ at Eremo di San Paolo on the outskirts of Arco, Italy. 9b had only been climbed three times previously, first by Angela Eiter in 2017 on La planta de shiva at Villanueva del Rosario in Spain, then by Rogora herself in July 2020 on Ali hulk sit extension total at Rodellar in Spain, and then in November 2020 by Julia Chanourdie on Eagle-4 at Saint Léger du Ventoux in France. This is therefore the first time that a woman has successfully negotiated a climb of this grade and what is astounding is not only the inordinate difficulty, but also the speed of her repeat - only 6 days in total. For the record, Stefano Ghisolfi who had established Erebor at the start of the year described the route as only slightly easier than Bibliographie at Ceuse…

Erebor. That’s absolutely amazing Laura! When did you start trying it? And, possibly a somewhat stupid question... why?
I tried it for the first time in March, I worked it for two days before the competition season started. And I decided to give it a go because I wanted to find a really tough project close to home.

So how did it go? We’ve seen the holds in Ghisolfi’s video, they seem non-existent ...
Actually on my first day I did all the individual moves, but there are practically no rests so it seemed quite impossible to me.

Did you use the same beta as Ghisolfi?
No I used very different sequences, as you’ll see later in the uncut video that will be put online later.

How did your attempts go? Did you always fall from the same moves?
Being an endurance-bases route without any good rests there was no particular section that caused me problems, no. Every attempt resulted in encouraging progress.

This year has been marked by an intense period of competitions, the Olympics, the World Cup, the World Championships in Moscow
Yes. And then when I returned from Russia I decided I wanted to go and try the route again. On the first day I looked at all the moves again, then I came back after a couple of days and I managed to do it with two only rests. The next time I needed only one rest. So knew I was close. I rested for a day and only did some easy routes in the gym, and the next day I sent!

That was quick!
Six days in total. Four now and two in March, with more or less three attempts per day.

Can you compare your performance on Erebor to Ali Hulk? They’re clearly two completely different climbs in terms of character and style, but what’s your gut feeling?
I think Erebor is more difficult, but Ali hulk was more of a mental challenge, because I was far from home and the climb has a lot more moves and rests that need to be managed properly.

And now? Knowing you, you’vel have already though about a new project
Actually not yet. But... stay tuned.

Before you mentioned that you’ll be publishing the uncut video of your ascent?
Yes, today at 16:00 on Youtube, on Mellow.

03.10.2021
Stellar Laura Rogora makes first repeat of 9b/+ Erebor at Arco in Italy
Laura Rogora has made the first repeat of Erebor at the crag Eremo di San Paolo close to Arco. Graded 9b/+ and established by Stefano Ghisolfi in January 2021, it is considered the most difficult sport climb in Italy. This is the first time a woman has climbed a route of this difficulty.

31.05.2020
Laura Rogora first Italian woman to climb 9a+, Pure Dreaming Plus at Arco
At the crag Massone in Arco, Italy, Laura Rogora repeated Pure Dreaming Plus, a 9a+ sports climb first ascended by Adam Ondra. The Roman climber is now the first Italian woman, and only the fifth woman in the world after Margo Hayes, Anak Verhoeven, Angela Eiter and Julia Chanourdie to climb 9a+.