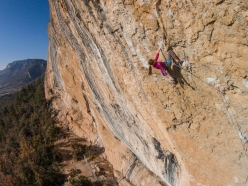 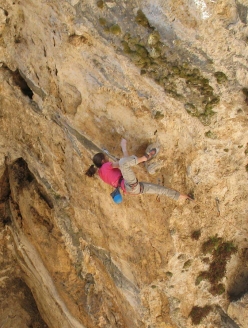 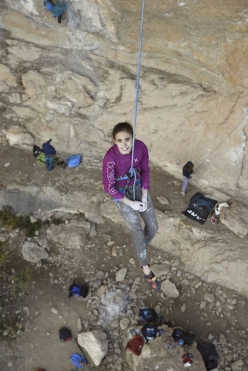 Laura Rogora / Climbing into the future

Interview with Italian climber Laura Rogora who, aged a mere 15, made the first ascent of a route at Collepardo on the outskirts of Rome which could be one of the hardest sport climbs ever freed by a woman.

8c aged 13, 9a at a mere 14. In the meantime she became Italian Lead and Boulder Champion, European Youth Lead Champion and won bronze in her category at the Youth World Climbing Championship in both 2015 and 2016. We’re obviously talking about Laura Rogora, the young Italian who recently added another important climb to the long list of accomplishments: the first ascent of La Gasparata at Collepardo, on the outskirts of Rome, which she has tentatively graded 8c+/9a. Should this be confirmed, then it could well be one of the hardest female first ascents of all times.

Laura, you recently returned from a great climbing trip to Spain, where you redpointed your second 8c+, Joe Blau. Tell us about the climb and that last day of your holiday when you managed to send it
.
After having quickly sent two 8c’s on the previous days, I decided to raise the bar. My first day on Joe Blau felt really hard, but I made good progress the next day. The first 20 meters are really intense and this section is followed by another 20 meters of stamina climbing on good holds and then a bouldery crux finish on the slab. I fell off at this point on my second day, I’d cut my skin on the dyno at the start and after a long battle, just when I thought I had the route in the bag, the blood on the holds and my forearm pump made me slip off the last foothold. I was happy because just a day earlier the route had felt really tough and now I’d almost reached the chains. But at the same time I was a little sad and disappointed, I knew that the chances of climbing it the next day, on the last of my holiday, were very low. The next day I climbed the route once, I felt tired and my fingers hurt, but nevertheless I then decided to give it a proper go. I had nothing to lose and so, after battling for 50 meters, I reached the top of my second 8c+!

As you mentioned, at Oliana you climbed two other 8c’s. Sounds like a perfect holiday at a perfect crag?
In actual fact we’d planned on climbing at Santa Linya, a crag which suits my style of climbing far less… but because of the bad weather we headed to Oliana. The routes are my style of climbing, they’re really long and require loads of stamina. And they’re not too steep and have plenty of footholds. During my first two days there I climbed two lovely 8c’s: T1 full equipe and the famous Fish eye, a mammoth 50 meter outing. I’d never climbed such a long route before as I’d always been worried about committing to so many moves, so I was really happy when I sent it.

These back-to-back ascents come after an extensive period of astonishing form: in November 2016 you made the first ascent of an 8c+ at Collepardo.
The route is located at Cueva, a new crag near Rome, and was established by the estremely active new-router Domenico Intorre. He had told me about the route but I was taking part in comps at the time and didn’t get a chance to try it. In the meantime Roberto Limetta, a strong climber from Rome, began working the line. It was rumoured to be a possible 9a, so when he asked me to try it with him, I accepted straight off. I liked the climb immediately, no single hard move, just a long stamina plod up tiny crimps. But then I competed in the World Championships in China so I didn’t get to try it again, and in the meantime Roberto snapped a hold off the crux after coming really close to freeing it. When I finally finished competing I returned to the route and clipped the anchor after another two days of work. This was my hardest first ascent and difficult therefore to grade. I hope that someone decides to repeat it because it’s really worth it.

And more recently you made the first ascent of La Gasparata, another new route you freed at La Cueva
The route is about 25 meters long. The first half is easy, 7a+ perhaps, followed by a long section with no rests at all. The crux is right at the top. The first time I tried it I thought it might be the hardest thing I’d ever attempted, but I quickly figured out the moves and sent it on the fourth go of the day, relatively easily. It was hard to grade and, in the end, comparing it to my recent repeats in Spain, I suggested 8c+/9a. A bit risky perhaps? Once again we’ll have to wait and see.

First female ascents. These happen in our sport but, truth be told, not particularly frequently
I don’t think it matters much who makes a first ascent, and much depends on luck. Around Rome there are few climbers capable of climbing this hard, there aren’t many young strong climbers about. And Roberto Limetta would probably have done the first ascent of La Gasparata, had he not broken the hold…

In April 2016 you onsighted your first 8b. This too is an absolutely top-end performance. What do onsights mean to you, compared to redpoints?
I like both styles and try to do them both. When I’m training for competitions I try to mainly climb onsight, although it’s definitely more stressful and tiring. And sometimes you also need a lot of luck. When the competition season ends I spend my time working some harder redpoint projects.

Of your many climbs, Grande Gesti obviously struck us. As did the quick repeat of legendary Wallstreet in the Frankenjura in conditions that were far from ideal. How did this come about?
I’ve always been interested in the history of climbing, and this route plays a significant role in the evolution of this sport. I saw a video on the internet and read the book about Wolfgang Güllich, and felt I could do it. So I talked to my parents and we decided to stop off in Germany during our trip to Prague. The idea was to stay there for a week, but we only stayed for three days due to the rain. On the first day I was tired, my muscles were still sore from the European Championships, but I got close on my third go. After a sunny day off we returned to the crag in the pouring rain. The last holds were soaking and on my first go I slipped off the easy section. Fortunately my next attempt turned out to be ace. Repeating the first 8c climb in the world was a unique experience

Talking about unique experiences and excitement: last summer you were nominated for the Wild Country Rock Award during the Arco Rock Legends ceremony. You were on stage with two "climbing greats", Daniel Andrada and Jakob Schubert. How was it?
It was completely unexpected ... I wish I’d asked them for an autograph!

In addition to your climbs outdoors, you can also boast outstanding competition results. Here are just a few: Italian Bouldering Champion in 2016 (after winning it in 2015), Italian Lead Champion 2015, European Lead Champion 2016 for your category, bronze in your category during the World Youth Championships in 2015 and 2016. Achieving this requires significant commitment and this begs the question: how important are competitions for you?
I like to do comps, enjoy training and being in shape for the major events. Obviously the time will come when I stop taking part in comps and spend more time outdoors at the crag, which I find more enjoyable and relaxing.

You'll be 19 in 2020 when sport climbing will take part in its first Olympic Games in Tokyo. What are your thoughts about this, and what do you hope for?
I’m really pleased that our sport has the place it deserves in the Olympic Games. However, I’m sad that in the end the combined formula was accepted, because in addition to not being liked by most athletes, there’s the risk that the spectators won’t like it either since it won’t be spectacular, as athletes will be forced to compete in disciplines that aren’t theirs. Perhaps the best thing would have been to select just one discipline and hope that, in time, other medals would be granted. Having said that, would I like to be one of the Olympic athletes? Of course I would!