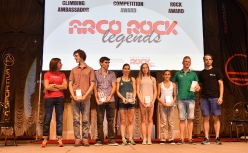 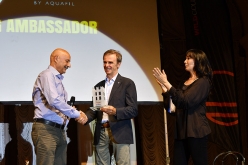 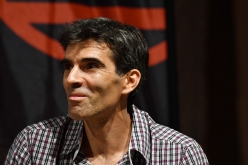 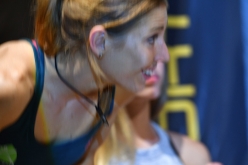 Last night the atmosphere at Arco’s Casino was Olympic and festive. A mix of satisfaction and pride for the first 30 Rock Master years - something absolutely unique in the climbing world - that mingled with the immense joy of the historic admission to the Tokyo 2020 Olympic Games. Yes, this was the moment to celebrate a dream yearned after for so long, during this 11th edition of Arco Rock Legends, the classic sport climbing Oscars which marks the start of the Rock Master Festival. And, it was palpable, there was the awareness that Sport Climbing has now come of age!

Before the celebrations though there was a solemn moment as the Arco Rock Legends remembered those recently affected by massive earthquake in central Italy, for which a day of national mourning has been declared. And of course the time came to remember John Ellison and Susi Knabl, two key figures for sport climbing and two great friends of Arco. The applause was long and heartfelt, a sign of how the Englishman and the Austrian touched the world of all climbers.

A vertical world that is growing exponentially. It is no coincidence therefore that the Rock Master organization assigned the Climbing Ambassador by Dryarn® di Aquafil to the International Federation of Sport Climbing, the IFSC, which represents 87 nations from all 5 continents countries “for the work, passion and dedication it showed during all these years to valourise sport climbing and for its great human and sporting values, making it fully recognised at the Olympics and in the great world of sports.” This motivation summaries the entire exciting history of this sport, as highlighted by IFSC President Marco Maria Scolaris. At the helm since 2001, Scolaris underlined that the next four years will be of utmost importance. There is a lot of work to be done. Decisions will have to be made. We need to ensure we’re ready for when the day finally comes. But, we wish to add, there is no doubt that the foundations are there, and that the prospects and the passion for climbing are great, just like the happiness (not just that of the IFSC president).

Talking about passion. This year's Wild Country Rock Award - the prize that recognizes achievements at sport climbing crags and bouldering - went to Daniel Andrada, the 41 year-old Spanish climber who received a huge ovation. The jury consisted of 11 international magazines and motivated the decision as follows: The legendary, total dedication and the manner in which sport climbing is interpreted as both a way of being and an expression, is an enrichment and an example. Experiencing the rocks at a cutting-edge level, combined with a continuous search for new emotions and new routes, has resulted in a priceless heritage for all climbers."

He, Andrada, seemed hugely surprised (and happy) for award. And just a few minutes earlier, in answer to Kay Rush’s question about how much time he spends climbing, he explained his simple recipe: "If I am hungry I eat, I sleep when I'm tired. And if I want to climb, I climb. " Just to put it into the picture... he really does have a great desire to climb and an equally enormous love for climbing, considering the 3000 new routes he has bolted. A passion and desire to climb he most certainly shares with the other two candidates, Austria’s Jakob Schubert who while not competing left an indelible mark with an impressive series of climbs outdoors, and Italy’s Laura Rogora who, aged 15 is not only the Italian women to climb 9a, but also the projection of what might lie in store in the future.

In the meantime, the climbing competition circuit will certainly be dominated by Slovenia’s Mina Markovič, winner of the La Sportiva Competition Award. Once again the Jury wished to stress more than simply the superb competition results of the three times Lead World Cup winner: ”The style and commitment is a reference for all female and male athletes in the climbing competition circuit. The ability to fight for every hold, the desire to win, the loyalty and sportsmanship make a perfect example of an Olympic athlete. " As Olympic as the other two nominees, 17-year-old Slovenian revelation Janja Garnbret and champion Adam Ondra from the Czech Republic. For them, and for everyone else, the goodbye is until the next Arco Rock Legends while thinking of that journey to wards Tokyo 2020.