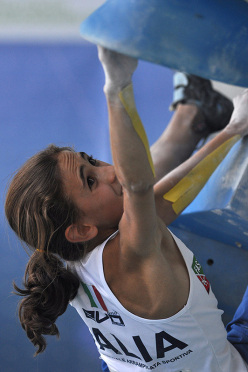 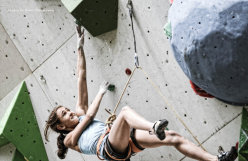 Young Roman climber Laura Rogora surpassed even herself last Sunday at Grotta dell'Arenauta close to Sperlonga, Italy, by redpointing Grandi Gesti, the route freed in 2009 by Gianluca Daniele and graded 9a. It goes without saying that with her repeat of this overtly overhanging and physical route, Rogora enters the Italian sports climbing hall of fame at a mere 14 years of age. Because despite maximum difficulties currently touching on a staggering 9b+, 9a remains astoundingly difficult, a mythical grade even which few climbers in the world (both male and female) are capable of sending.

Basque powerhouse Josune Bereziartu was the first woman to climb 9a with her ascent of Bain de Sang at Saint Loup in Switzerland in 2002, and even if in the meantime the list of those who dominate this grade has lengthened, 9a is obviously an extremely important milestone. Very few Italian males have succeeded in this feat and until last Sunday no Italian woman had achieved this result at a sports crag. Italy’s first female 8a was climbed in distant 1986 by Luisa Iovane with her ascent of Come Back in Val San Nicolò. The first 8b was recorded in 1990 when Raffaella Valsecchi managed to redpoint Jedi at Cornalba, while the 8c barrier was finally broken in 2006 when Jenny Lavarda sent Claudio Caffè at Terra Promessa, Arco. In 2009 Lavarda redpointed Solo per vecchi guerrieri, a Dolomites multi-pitch graded 8c+/9a, but since then no significant headway has been made on single pitch sports climbs. Until Sunday, that is.

Rogora’s success obviously doesn’t come out of the blue, on the contrary, despite her young age she’s been a force to be reckoned with both at the crags and in competitions. In December 2014 for instance, at a mere 13 years of age, she managed to redpoint her first 8c, Ciccio Formaggio alla Grotta dell'Arenauta. Interestingly, in doing so she completely skipped the 8b+ grade. Four months later she confirmed her talent and these difficulties by repeating the 8c Il Corvo at Ferentillo. And Grandi Gesti now comes in the wake of these two climbs, without having previously sent 8c+ - which indicates that perhaps Rogora isn’t a great fan of half grades! In the meantime the young Italian has also successfully taken part in climbing competitions, dominating the Italian scene last season (she’s reigning Italian Lead Champion and also Italian Boulder Champion) and winning her category’s Lead bronze medal at the World Youth Championships 2015 at Arco, where she was beaten only by another two rising stars, Slovenia’s Mia Krampl and America’s Ashima Shiraishi.

Last Sunday, despite not feeling particularly on form and with a poor weather forecast as Rogora wrote on Facebook, she decided to attempt her project in that beautiful cave located 2 hours south of Rome. She brushed the holds on her first go, then set off on her successful attempt. "I’m concentrated" wrote Rogora "climb well, manage to use the rests properly and cheered on by everyone else I reach the chain of my first 9a, GRANDI GESTI at Sperlonga."

For the record, the first Italian to climb a 9a was Alessandro Jolly Lamberti with his first repeat of Fred Rouhling’s Hugh at Eaux Claires in France, while the first 9a freed in Italy was Alberto Gnerro's Ground Zero at Tetto di Sarre. Gnerro freed the line in 2002, Lamberti repeated Hugh in 2001. Yes, precisely the same year in which Laura Rogora was born.