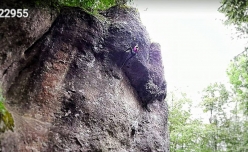 Young Italian climber Laura Rogora from Rome has redpointed Wallstreet, Wolfgang Güllich’s 1987 masterpiece located at the Krottenseer Turm in Frankenjura, recognised as the world’s first 8c. A historic testpiece that packs more than a punch: in its first 15 years, it was repeated only 10 times.

Although almost thirty years have passed since Güllich first freed the route, even nowadays Wallstreet is rarely repeated. In May 2014 France’s Mélissa Le Nevé caused a stir with the coveted first female ascent, followed three months later by Austria’s Johanna Ernst. Now 15-year-old Rogora checks in with her repeat, after a mere six attempts and despite the rain.

In February this year Rogora sent her first 9a, Grandi Gesti at Grotta dell'Arenauta at Sperlonga, and this performance didn’t go unnoticed: she is currently nominated, together with Spain’s Dani Andrada and Austria’s Jakob Schubert, for the Wild Country Rock Award which will be assigned during the Arco Rock Legends awards on Friday 26 August 2016.