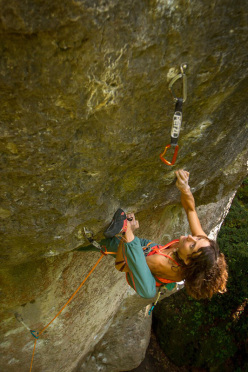 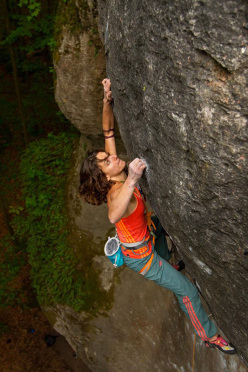 Interview with French climber Melissa Le Nevé after the first female ascent of Wallstreet, the 8c first climbed in 1987 by Wolfgang Güllich in Frankenjura, Germany.

Not bad for one of her first routes in the Frankenjura! After circa 10 days of attempts 24-year-old climber Mélissa Le Nevé hit gold last Thursday with her first female ascent of Wallstreet, the famous route established 3 years before the Frenchwoman was born by Wolfgang Güllich. 27 years have passed since Güllich marked an important step in sport climbing, creating what is widely recognised as the world's first 8c, and the fact that in almost 3 decades the number of repeats is down to a minimum speaks volumes about how tricky this 8c is. And if you don't believe us, ask Alexander Megos, someone who knows a thing or two about hard routes in the Frankenjura. "Yes, Wallstreet really isn't easy" he told us last night, adding "Melissa's ascent? Respect!"

Melissa, of all the hard routes in the Frankenjura, why did you choose Wallstreet

I really wanted to try this route for two reasons: first of all because i really like the history and this route and with it Wolfgang Güllich set an important milestone in the history of sport climbing. The other reason why I really wanted to climb this route is connected to the its name, Wallstreet reminds me of Pink Floyd and their album The Wall. Not long ago I was really into this music and I’ve got great memories from my time in Bordeaux, spending time with Alizée Dufraisse. Two good reasons to at least give it a go!

Tell us about the start
I tried the route for the first time last October, for 2 days before flying to the Sisu Master in Finland. Unfortunately conditions were awful, and I returned to the Frankenjura 2 weeks ago with this route in mind.

How did it feel? And tell us about that heel hook! It looks like a new sequence!
I had good sensations right at the start and yes, I managed to find a crazy method using my left heel hook. For me this was a way better sequence to grab the weird two finger pocket. I first thought I’d send the route quickly, in just a few days, but I was wrong and it took me longer time than I thought...

The route is really powerful. How many attempts could you give it each day?
I think I could have given it about 6 decent tries a day, but then the next day I’d have felt totally mashed! So mostly I did 2, 3 perhaps 4 attempts, depending on conditions. I needed to make productive attempts, but also be able to climb the next day!

The crux is at the top
I got very close to doing the last move, with its really crimpy undercling, around 10 times but I always fell. Then a friend showed me another hold and asked "why don’t you use this one?" "Its just too far and way too small…" I replied. But I tried it just in case and it suddenly seemed way better! And next day I did the route!

Does the Frankenjura suit your style?
At first I thought no, it doesn’t. Because of the many two finger pockets… I was really scared of injuring my fingers! But I have to say it seems as if I’ve got used to them ;-)

How does this route compare in terms of difficulty and excitement?
This route was totally different! So far this is the longest I’ve had to work for to get a route or boulder and in fact the sensations I had were closer to bouldering than sport climbing. I realised I needed to be way more precise than usual. For example, just changing the angle of the crux hold by 1° made all the difference, I could hold it well but it hurt too! I knew I could do all the moves, but I needed to stay concentrated 100%, there was no room for mistakes.

So what next?
Well I’d like to spend more time outside to try harder stuff, but in general I consider climbing a very complete sport and I’m always motivated by a challenge, where it is. I like pushing myself, physically and mentally, in different types of situations. Competitions, boulders, sport climbs, multi-pitch routes, whatever!

Last question: Wallstreet happens to be one of your first routes in the Frankenjura
Yes, I haven’t spent much time here and I’ve still got lots to discover in this huge forest. It’s magical!