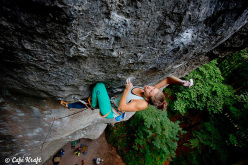 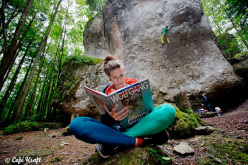 Wallstreet redpointed by Johanna Ernst, too. After the first female ascent in May by Frenchwoman Melissa Le Nevé, the Austrian climber Johanna Ernst has also managed to repeat the route first climbed in 1987 by Wolfgang Güllich in the Frankenjura and recognised by many as the first 8c in the world.

Ernst hit the limelight at a mere 15 years of age when she onsighted an 8a+ at the Schleierwasserfall crag, while in 2009 and at 17 she became the youngest Lead World Champion, a success that came in the wake of a startling 2008 during which she won the Lead World Cup, the European Championship and the Rock Master. She confirmed her supremacy a few months later by doubling her takings and winning the Lead World 2009. An ankle injury in 2010 forced her to abandon competitions for two years, and in 2013 she announced she would no longer take part in the competition circuit. That year she managed to redpoint up to 8c+ and the recent repeat at the Krottenseer Turm – as can be seen in the video – obviously means a lot. Not only for her.