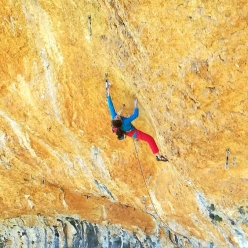 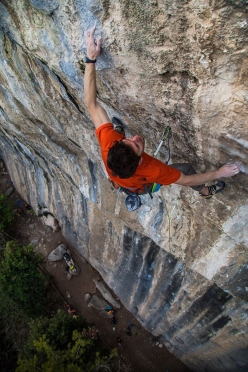 At Italy's Padaro crag close to Arco Stefano Ghisolfi has freed Omen Nomen, an 8c+ sports climb, while Laura Rogora has made the first ascent of Ercole 8c/+ at Collepardo.

Yes, it’s them again, Laura Rogora and Stefano Ghisolfi, at dominating the Italian sports climbing scene. After their splendid double whammy at the start of the year at Oliana in Spain, where Rogora repeated Joe Blau 8c+ and Ghisolfi onsighted Fish Eye 8c, the two Italians have now freed some hard climbs close to home.

15-year-old Rogora from Rome travelled to the nearby crag Collepardo where in January she had pulled off the first ascent of the 8c+/9a La Gasparata. Rogora has now freed Ercole, an 8c/+ described as being "fantastic" and "completely natural", bolted by Cesare Giuliani and named after the new route’s father.

Ghisolfi for his part continues to free old projects close to his new home Arco. At the end of December he freed Ultimatum 9a+ at Massone, while in recent days he turned his attention to a line at Padaro, the historic crag discovered years back by Mauro Mabboni. This great sheet of limestone above the homonymous village a stone’s throw from Arco is enjoying a second wave of popularity thanks above all to the tireless new routes Sauro Merighi and Matthias Knaubert, and now hosts 130+ routes up to 8c+ thanks to Ghisolfi’s recent redpoint of Omen Nomen. But as the name indicates, it’s highly likely the route is considerably harder…

15.02.2017
Laura Rogora / Climbing into the future
Interview with Italian climber Laura Rogora who, aged a mere 15, made the first ascent of a route at Collepardo on the outskirts of Rome which could be one of the hardest sport climbs ever freed by a woman.