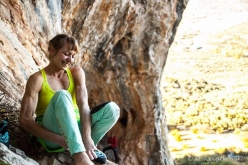 Angela Eiter after La planta de shiva at Villanueva del Rosario in Spain. With this ascent she has become the first woman in the world to climb 9b
Photo by Redbull Contentpool/ Elias Holzknecht 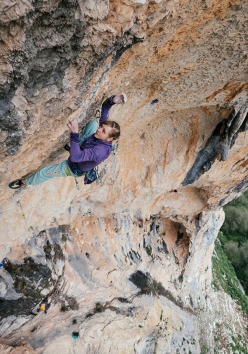 Angela Eiter climbing La planta de shiva at Villanueva del Rosario in Spain to become the first woman in the world to climb 9b
Photo by Redbull Contentpool/ E.Holzknecht 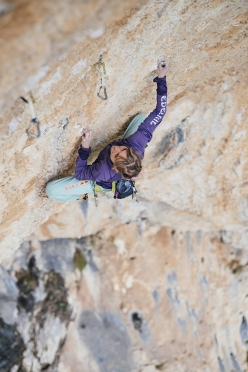 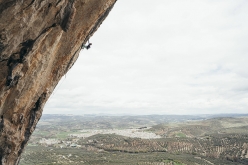 There’s no need for a big introduction: as reported yesterday, last Sunday 31-year-old Angela Eiter climbed La planta de shiva at Villanueva del Rosario in Spain. With the ascent of this route, freed by Adam Ondra in 2011, the champion competition climber has become the first woman in the world to climb 9b, a degree of difficulty reserved for the absolute elite. This ascent - which transcends gender - follows the first female ascent of a 9a+ carried out last February by America’s Margo Hayes. It seems superfluous to underline that we’re currently experiencing a historic, exciting and new era for sport climbing and no doubt Adam Ondra’s 9c -a level of difficulty unheard of only a few years ago - is still fresh in people’s minds. In oder to put into context the achievements of Margo Hayes with her two 9a+ and now Angela Eiter with her 9b, it’s worth remembering that so far 9b+ has only been redpointed by two climbers. The first is (of course) Adam Ondra, while the second is Chris Sharma. Surely that’s saying something?

Angela, we have to admit it: your ascent took us by surprise. But something like this certainly can’t come out of the blue. Presumably you tried it a bit before your successful ascent on Sunday.


Yes, well I first started trying it in October 2015. Actually, I only tried it twice back then, but I understood immediately that the route was perfect for me and I was fascinated by it. I found intermediate holds on the long reaches and realised that it was my ideal style of climbing.

That was back in October 2015
Yes, then over the next two years I returned seven times in total. At times just for a week, sometimes when I managed to get away from work for longer then I went there for two weeks. Prior to this trip in October I tried the route in May.

So how did things go over the years?
My attempts were plagued by lots of frustrating moments. I never managed to link the hardest sections on the second pitch before this October. Jakob Schubert did the second ascent in early 2016 and after sending the route explained that it had been the fight of his life, and that really intimidated me. I started to question whether I’d chosen the right route and so I actually decided to focus on climbing the second part only, I thought that would be difficult enough.

Can you explain this a bit better?
The first pitch of Planta de Shiva is an 8c, while the extension is actually the far harder section. I don’t know what grade it would get, but it’s certainly a lot harder than anything I’ve ever climbed before. I thought that would be enough, if the second section is so hard, then I can’t do better than that!

So you almost gave up?
While working the moves two holds broke off so I had to find new sequences. I injured my finger and also my hamstring. Things got so frustrating that at one point I said to myself "Unfortunately I’m going to have to abandon this beauty."

But then...
One day I decided that I really enjoyed the climbing and every single session on it. And I really, really wanted that route. So when I was finally injury-free I returned in May and although I failed while trying only the second section, right at the top, sensations were good. This October I climbed the second section and suddenly I realised "Oh no, now I’ve got to try things seriously..." And two days later on Sunday 22 October I did the entire link from the ground!

You mentioned that you’d thought about abandoning the route altogether. You were attempting 9b, in the past you’d climbed three 9a’s, that’s an enormous leap Angela. Why did you choose this grade, instead of trying 9a+ which - for the record - had never been done before Margo Hayes pulled it off in February?
To tell you the truth I really can’t answer your question, because I don’t know why myself. I didn’t consciously go out in search of Planta de Shiva, it all happened spontaneously. Back in 2015 I made quick work of the first part of the route, the 8c, and then I looked at the topo and asked myself what was above. I could see a line of small crimps and wondered if I might enjoy it. And then my husband Bernie gave me the courage to give it a go!

So you were motivated by the beauty of the line?
Yes, but also by its difficulty. At the time I was looking for something really demanding, a route which would require more off me than I’d ever given in the past. I was fascinated by the idea of trying something very, very difficult.

So while you were grappling with your 9b project, Margo Hayes became the first woman to climb 9a+, followed a few months later by Anak Verhoeven.
That was amazing news! I really love it that women and powering forward, breaching barriers and pushing the limits ever upwards. It’s such an inspiration, both now and also when I look back into the past. There have been so many impressive female athletes that we can draw from, and so many new ones doing ground-breaking ascents all the time, it’s amazing.

Angela your attempts on La Planta de Shiva were pretty low-key, we for example knew nothing about it. Did you get any special support?
Yes. Adam Ondra in particular was really supportive, he motivated me to try the route seriously. And I thought "well if someone knows best, then it’s him!"

Ondra climbed it in 2011 and Schubert confirmed the grade in 2016
Yes, for me that was really good news. It meant I was working on something concrete and could concentrate on the climbing only.

Realistically, did you think you stood a chance this October?
Truth be told, I didn't think I had a chance at all. If I'm really honest with myself, I have to admit I'd stopped believing it was possible. I knew that if I was going to succeed, I’d have to do everything 100% right, and give it absolutely everything I had. And now, up there on the last moves, I was right at the very limit! Actually, I almost fell off the last move! I was incredible!

We can hear the joy in your voice! Why do you think you succeeded now?
Perhaps above all because I was fascinated by the line. And secondly of course because it was my style: there are many easier routes out there that aren’t my style and that I simply can’t climb, but Shiva as I said suited me perfectly. And my training at home was obviously another key to my success: I replicated the same intensity and trained specifically for it. And of course I drew from all my previous climbing experience.

Outdoors, but also indoors? Did you competition experience come into play?
Yes, certainly. You need to be able to produce a perfect performance at a specific moment, and competitions teach you this to perfection.

Last question Angela: what has this 9b project, this entire process, given you?
The unconditional support from my husband, and from my father. Without their belief in me I would never have done the climb. I needed someone by my side who would reassure me, would help and accompany me. Doing something at this level is something extremely personal and it's thanks to the unwavering support of these two really important people that I eventually succeeded.