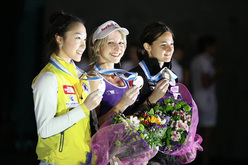 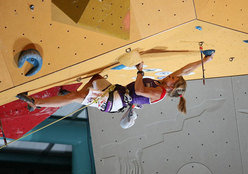 In the Arco Climbing Stadium Angela Eiter won the Lead World championship for the third time.

Angela Eiter is the new Lead World Champion. The 25-year-old Austrian has been one the the all time greats of this sport for a long time, but after this third World Championship title won here in Arco there can be no doubts: she is one of the greatest of all times. Jain Kim from Korea placed while 17-year-old Magdalena Röck from Austria finishes third.
Read the competition report


Read the full Women's Final Report, check out the gallery and watch the videos produced by the Planetmountain teams on the official World Championship website www.arco2011.it