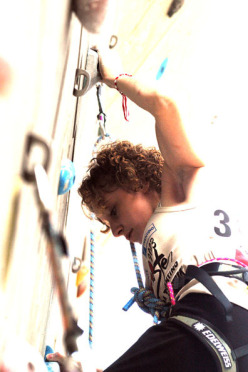 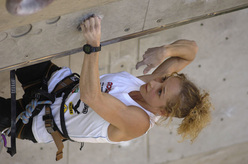 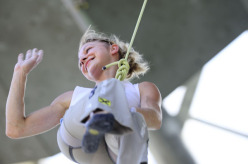 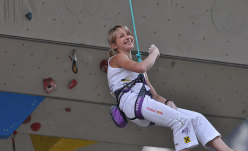 Angela Eiter, 10 years as the champion of climbing competitions

Interview with Angela Eiter, the queen of climbing competitions who recently bid her official farewell to the world of competitions.

"Regal climbing, determination and results." This is what we wrote exactly 10 years ago, in September 2003. The curtain had just fallen on Rock Master and at that time we were so impressed by the performance of 17-year-old that we have concluded our report by stating: "A new star is born, her name is Angela Eiter."

In the 10 years that followed Angela Eiter lived up to our expectations, dominated the Lead competition scene like no other, winning absolutely everything there is to win: three World Cups, one European Championship and a staggering four World Championships. A true record to which one must obviously add the six victories in Arco Rock Master, the competition reserved for the very best that served as a springboard for her competition career. Not long ago Eiter officially bid farewell to competitions and she's now off to seek new challenges elsewhere. At the crags, in the mountains, teaching climbing to children... One thing is certain: wherever she goes, she will be accompanied by her constant and disarming smile!

Angela, when and why did decided to stop with competitions?

After all these years I feel satisfied when I look back at my competition results, but I also have a certain nostalgia for nature. Training for competitions means intensive training on indoor walls, in the gym and right now I'm no longer willing to sacrifice everything for competitions.

Excluding your victories, what has competition climbing given you so far?
Through competitions I've learnt how to prepare in scheduled manner to achieve my goals. In addition, in recent years I had many ups and downs and this journey has shaped and strengthened my personal character. Climbing gives me a chance to have fun while keeping me in shape, both physically and mentally.

So what will you do now? What are your plans?
I'd like to explore different climbing areas with my boyfriend and friends, to do some sport climbing at the crags and also some multi-pitch sport climbs in the Alps. In truth I've got many plans and goals mixed chaotically in my head and I still have to figure out what I'm capable of doing and exactly where and how far I can explore my limits.

We also know that you want to teach climbing to children. How come, and what message do you want to get across?
I like children who are really active and motivated, being with them provides me with joy and I really love being able to help them on their journey. I train a group of youngsters belonging to the Imst section of the Austrian Alpine Club, as well as some athletes on a personal level. I try to share all my experiences, everything I've learned over the years, and I also try to understand their individual.

So what advice would you give to someone who starts to climb? What things are important to you?
The absolute priority is being familiar with all safety techniques. And also learning the correct climbing moves. That's the reasoning behind these climbing courses.

We met you at Arco a few days ago, you had been nominated for the Arco Rock Legends Award which, among other things, you'd already won in 2006 during the first edition of the La Sportiva Competition Award. Although you didn't win this year, were you surprised by the nomination and what does this sort of accolade represent?
There are very many highly successful athletes in the competition circuit. So yes, I was very surprised to be among the three athletes nominated this year for the La Sportiva Competition Award. The award shows athletes how they are perceived and ranked outside the competitions. It's therefore an important prize that recognises the results obtained in sport climbing competitions.

If you have to think of just one competition, does one in particular spring to mind? And if so, why?
I have experienced many beautiful moments in my unforgettable career that has numerous victories. However, all these achievements are based on a fundamental experience, namely the Rock Master victory in 2003. As a small girl from Imst, just 17-years old, I managed to win the Rock Master surprisingly convincingly. This marked the beginning of a wonderful competition career...