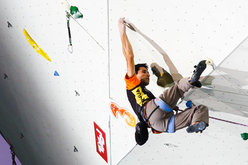 Ramón Julian Puigblanque competing in the Final of the European Championship Lead 2010
Photo by www.euro-2010.at 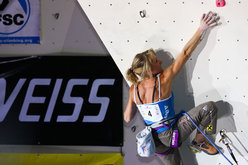 Angela Eiter competing in the Final of the European Championship Lead 2010
Photo by www.euro-2010.at 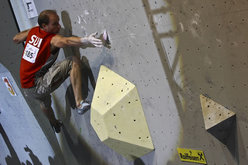 Cédric Lachat competing in the Final of the European Championship Bouldering 2010
Photo by www.euro-2010.at 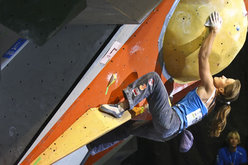 Anna Stöhr competing in the Final of the European Championship Bouldering 2010
Photo by www.euro-2010.at

So, after four intensive competition days in Innsbruck and Imst, Europe now has its climbing kings and queens. In the form of Spaniard Ramón Julian Puigblanque and Austrian Angela Eiter for Lead, Swissman Cedric Lachat and Austrian Anna Stöhr for Bouldering and Russian Sergey Abdrakhmanov and Polish Edyta Ropek for Speed. These are the new European sport climbing champions, and let's start by saying that there were no great surprises. Even if the fight, the true battle, went down to the wire. And this is a reflection of the current state of climbing competitions: victory usually comes about by a hair's breadth as there are many athletes capable of winning. All of those who qualify for the final stand an excellent chance in reaping victory, because the ability level is extremely high, especially in Bouldering and Lead, and above all "widespread" amongst many highly talented athletes.

Adam Ondra knows a thing or two about this. Tipped as favourite for the Lead and Bouldering titles, in the end magic Adam had to "make do" with 2nd place in both events. This double silver is as exceptional as it was unthinkable just a few seasons ago... but yes, it isn't gold. And Johanna Ernst certainly didn't achieve the result she had hoped for, after "collapsing" into second place behind Angela Eiter, her team-mate and rival from whom she had usurped the throne. This result can be partly explained by Ernst's injury and consequent enforced competition stop, as we will see later.

Excellent Cedric Lachat deserves a special mention: after his victory at the pre-world championship in Arco's Rock Master, the Swissman once again confirmed his truly outstanding year by winning the European Championship. Just like the immense Ramón Julian Puigblanque who, after having won all there is to win in the Lead competitions (from the World Championships to the World Cup), now takes home his second European title, after Lecco 2004. Anna Stöhr for her part adds another title to her already exceptional palmarès, with highlights such as the victories in the Bouldering World Cup in 2007 and European silver and bronze, in 2008 and 2005.

"Monster" Christian Core deserves a special mention, too: in the past the Italian champion climber has won all there is to win in the Bouldering discipline and now, at a tender 36 years of age, can be more than proud of his 7th place, the best Italian in the competition and first excluded from the final. The best Italian woman in the Championships was Sara Morandi whose 5th place in the Speed comp confirms the trust placed in her, especially since there is still significant margin for improvement.

For the record, in the Lead final Ramonet Puigblanque beat Adam Ondra by two holds after an intense Semifinal during which the 17-year-old from the Czech Republic had been the only athlete capable of reaching the top. This, if you wish, is a sign of the small-grand Spaniard's undisputed class, as well as an indication of the importance of competition experience. Also because, during the final climb, Ondra risked losing even silver, seeing that a photo finish split him from the fantastic 20-year-old Jakob Schubert from Austria, who only touched a hold which Ondra had managed to stick. David Lama had to make do with with a wooden medal but his 4th place confirmed just how strong the Austrian squad is. Magnus Midtboe from Norway placed 5th, while defending European Champion Patxi Usobiaga saw his promising provisional 2nd place slip to a disappointing 6th. Mikhail Chernikov from Russia placed 7th, while Manuel Romain from France finished 8th.

Angela Eiter won the women's Lead title by climbing significantly higher in the final (8 holds) and semifinal (10 holds) than Johanna Ernst. As stated previously, while it's clear that Ernst hasn't fully recovered yet, it's just as clear that Angela Eiter seems to have returned to her former glory. Their duel is now more open than ever before, also because the other "Europeans" currently don't seem much cause for concern. In truth France's Alizée Dufraisse didn't finish too far behind Ernst to win bronze, but the others lagged behind: Mina Markovic from Slovenia placed 4th, Alexandra Eyer from Switzerland 5th, Olga Shalagina (UKR) 6th, Charlotte Durif (FRA) 7th and Barbara Bacher (AUT) 8th. Big names such as Natalija Gros and Maja Vidmar placed 10th and 12th respectively, while veteran Muriel Sarkany's 18th place certainly isn't representative of her capabilities.

Adam Ondra's second unfinished masterpiece lay in the Bouldering competition. Once again the enfant prodige led provisional first after the Semifinal but, just like in the Lead, gold was "whisked away" by another great (and unpredictable) athlete: Cedric Lachat. The Swissman had had his eyes set on gold right from the outset and had qualified for the final in provisional second, hot on Ondra's heels. The final promised to be a battle between these two and nerves of steel would be imperative. What is strange (for Ondra) is that Lachat got the better, proving that the Swissman is currently on his best form ever. So much so that he won by a crushing margin, 4 tops in 5 attempts, versus Ondra's three.

What is interesting to note is that both had a double commitment, Bouldering + Lead, and the Combined ranking obviously sways in Ondra's favour thanks to his two silver medals, compared to Lachat's bouldering gold and 12th place Lead. Ondra's absolute valour is undisputed therefore, also because the youngster can only improve further still... Talking of maturity and absolute top end ability, Mr. Kilian Fischhuber springs to mind. The Austrian athlete has dominated the bouldering competitions over the last couple of years and in Imst he placed an excellent third. He was followed by two surprises, Jernej Kruder (SLO) amd Casper TenSijthoff (NED) and one confirmation in the form of Klemen Becan (SLO). And then, in 7th place and first excluded from the final, one absolute certainty from the past: Christian Core.

Talking of certainties: 22-year-old Anna Stöhr bouldering form is comparable to a mantra: she is always a force to be reckoned with. She clinched victory by commanding the field from the outset, then fighting to the finish to beat this season's revelation, 17-year old Juliane Wurm from Germany. Stöhr won with 3 tops in 5 attempts, while Wurm needed 8 attempts more for her 3 tops. They were followed, with 2 tops each, by two other great female boulderers: Olga Shalagina from the Ukraine and Olga Bibik from Russia. Melissa LeNeve (FRA) and Anna Galliamova (RUS) placed 5th and 6th respectively with just one top, while young Alexandra Ladurner placed 16th, the best of the Italians.