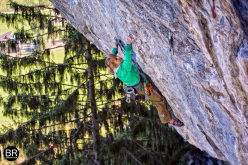 On 04/10/2014 at the Austrian crag Götterwandl Angela Eiter made the first ascent of Hercules 8c+.

Angela Eiter is on a roll, there's no doubt about it. Take for example her August bouldering trip to Rocklands, where she repeated an 8B and – almost more impressively – flashed an 8A boulder problem. While in June the Austrian repeated Reini's Vibes 8c/c+ at Massone above Arco, Italy.

Now the four-times Lead World Champion checks in with what she believes is her hardest first ascent ever, namely Hercules 8c+. Located at her home crag, the Götterwandl at Nassereith, this line is a "collage" of three existing routes; the lower section of Nofredete and the crux moves of both Neptun and Odysseus. The result are 42 intense moves and, according to Eiter “an extremely logical line." Seeing that she had climbed all three routes previously, all the 28-year-old had to do was try the new linking sections before sending the route on day 3.