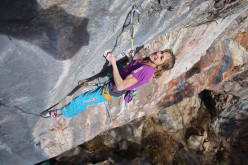 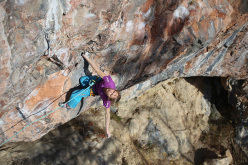 Austrian climber Angela Eiter has climbed her second 9a, Big Hammer at Pinswang in Austria.

It borders on the unbelievable what Angela Eiter has been up to recently: after the first ascent of the 8c+ Hercules at Götterwandl and the 8c+ repeat of Zauberfee at Arco that merely paved the way for Hades, her first 9a, yesterday the Austrian climber doubled her takings by redpointing her second 9a, Big Hammer at Pinswang in her home Tyrol. The route was freed by Christian Bindhammer in 2005 and at the time the German described the line as follows: "Up until now I've never come across a single move which requires so many different types of strength and such a complex sequence of moves."

Eiter told Planetmountain.com: "I really can't believe I've achieved this yet! I tried Big Hammer this autumn for the first time and I had no idea how to solve one of the two hard boulder problems. Finally though I found a solution that suited my size, but, the pocket in the crux was a real battle, both tough and painful. All in all in needed about ten days of projecting."

Ten days for a 9a really is very quick indeed and there can be no doubt that with this latest redpoint Eiter has confirmed, once again and increasingly so, that she is one of the strongest climbers out there.