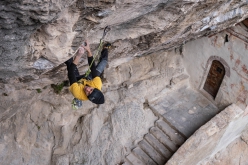 Stefano Ghisolfi making the first ascent of Erebor at Eremo di San Paolo close to Arco. Graded 9b/+, this is currently the most difficult sport climb in Italy.
Photo by Sara Grippo 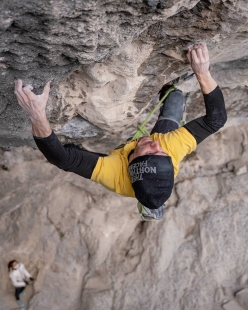 Stefano Ghisolfi making the first ascent of Erebor at Eremo di San Paolo close to Arco. Graded 9b/+, this is currently the most difficult sport climb in Italy.
Photo by Sara Grippo

Stefano Ghisolfi establishes Erebor, at 9b/+ the hardest climb in Italy

Stefano Ghisolfi has made the first ascent of Erebor at Eremo di San Paolo close to Arco. Graded 9b/+, this is currently the most difficult sport climb in Italy.

On Friday 8 January Stefano Ghisolfi completed his difficult project at Eremo di San Paolo, a stone's throw from Arco Italy. In doing so he has established the most difficult sport climb in Italy.   Curiously, this is the first route the 27-year-old climber from Turin ever bolted; Erebor dates back to last June, under the expert eye of Severino Scassa, and Ghisolfi immediately realised that the line he had imagined would be extremely difficult, if not impossible.

After the first lockdown attempts began in earnest and were documented as usual on Ghisolfi’s social media channels. When the summer heat gripped the country Ghisolfi travelled north to cooler Norway where he claimed the first repeat of the Adam Ondra’s 9b+ Change at Flatanger. Crisp conditions accompanied the onset of winter and, braving the intense cold last Friday, he finally redpointed the route after having fallen off the last moves about a dozen times.

In 2015 Ghisolfi was the first to add 9b to Italy with his Lapsus at Andonno, and he has now raised the bar once again, suggesting the grade 9b/+. Ghisolfi reckons Erebor is not a full-blown 9b+ since it is slightly easier than Change and Perfecto Mundo (which he repeated in 2018), but nevertheless it stands as "the hardest route in Italy and my proudest first ascent". 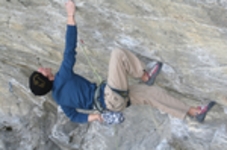