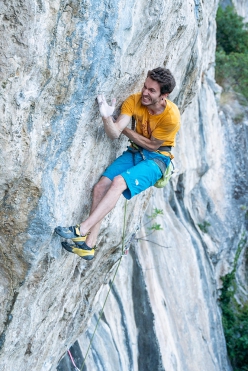 Stefano Ghisolfi on the crux moves of The Bow 9a+ at the crag Padaro above Arco, Italy
Photo by Sara Grippo

Stefano Ghisolfi takes The Bow, new 9a+ at Padaro, Arco

27-year-old climber Stefano Ghisolfi has made the first ascent of The Bow, a new 9a+ sport climb at the crag Padaro in Arco, Italy.

Despite far from ideal conditions, yesterday at the Padaro crag above Arco, Italy, Stefano Ghisolfi completed his spectacular Bow project. The line is a linkup of two existing routes, Fine di un'epoca 8b and Omen Nomen 9a that Ghioslfi himself had established in 2017. The name of the new route derives from the fact that on the crux Ghisolfi had to bow downwards in order to traverse left towards Omen Nomen.

The crux section is comprised of 25 intense moves with no rests and a spectacular traverse - holding an undercling with his left, he crossed over with his right arm to grab a second undercling. Even after the traverse the route is far from over, as highlighted by the fact that the 27-year-old fell above the crux on a couple of occasions. Ghisolfi had started attempts immediately after establishing his Beginning at the nearby Eremo di San Paolo crag and yesterday, despite soaring temperatures, he made the first redpoint of The Bow, grading it 9a+.

The Bow is, hopefully, only the first chapter in Ghisofi’s summer escapades, as he can now focus his energies on another line: Project Eremo at Eremo di San Paolo. This is the first route Ghisofi has cleaned and bolted all by himself (under the expert eye of Severino Scassa) and the route promises to be very, very difficult indeed.

09.03.2020
Stefano Ghisolfi: stay at home, it’s time to climb and let your imagination soar
Stefano Ghisolfi, one of the best sport climbers in the world, appeals to the climbing community to not underestimate the Coronavirus crisis and to stay at home as much as possible.