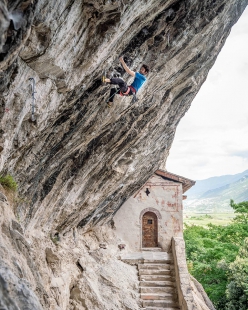 Stefano Ghisolfi concludes his Beginning 9a/+ at Arco

At the crag Eremo di San Paolo close to Arco, Italy, Stefano Ghisolfi has made the first ascent of Beginning 9a/+.

Stefano Ghisolfi’s garage lockdown training has evidently been extremely effective, as in the last few days the Italian has repeated three 8c+ and made short work of his 9a/+ project.

Ghisolfi started by settling the score with Zauberfee, an 8c+ at Eremo di San Paolo bolted by Gerhard Hörhager and freed by Christian Bindhammer in 2003; Ghisolfi had attempted it briefly in 2015 and redpointed it now after a mere two days of effort. After redpointing X-Large at nearby Massone he returned to Eremo di San Paolo for St Anger, the 8c+/9a located immediately to the right of Zauberfee which he sent after just 5 attempts.

A bolt needed replacing on St Anger and while doing the necessary maintenance Ghisolfi also added a new bolt to connect the intense start of St Anger with finishing crux section of Zauberfee. This superb project withstood a mere three days. "Too hard to be just 9a, but too easy to be 9a+" was the 27-year-old’s comment, who has now called the linkup Beginning because it marks the start of a new "normality".

For the record, the bolts placed under the watchful eye of Severino Scassa are Ghisolfi’s first. Laghel is currently still off limits but Ghisolfi is now armed with a drill. Who knows what’ll get up to in the coming months!

Project Beginning is no more a project, the beginning of a new "normality" already started and climbing this route is the best way for me to begin dreaming again. Too hard to be just 9a, but too easy to be 9a+, the new route in Eremo di San Paolo is "Beginning" 9a/+ ! Thanks @sara_grip for all the support , @sevescassa for helping me with boltingthe connection, and @kirsch_climbing @bambinala and @laura.rogora for the videos and photos during the days of the tries. Watch the full story on my stories! @thenorthface @lasportivagram #foryourmountain @camp1889 @epictv @hrtholds @misuraweb @visittrentino #neverstopexploring @fiammeoromoena #fiammeoromoena @gardatrentino @italiateam @italiaclimbing @frictionlabs • #climb #climbing #steghisati #rockclimbing #klettern #escalade #bouldering #climbing_pictures_of_instagram

14.05.2003
Zauberfee, 8c+, by the Bindhammer brothers
On 13/04 Christian Bindhammer frees "Zauberfee" 8c+, at the Eremo di S. Paolo (Arco). And his brother Andreas Bindhammer repeats it a few days later.

09.03.2020
Stefano Ghisolfi: stay at home, it’s time to climb and let your imagination soar
Stefano Ghisolfi, one of the best sport climbers in the world, appeals to the climbing community to not underestimate the Coronavirus crisis and to stay at home as much as possible.