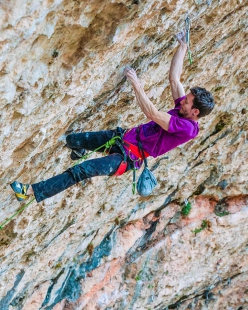 Stefano Ghisolfi sending Stoking the Fire, the 9b established by Chris Sharma at Santa Linya in Spain
Photo by Sara Grippo

Today at Santa Linya in Spain Stefano Ghisolfi has repeated Stoking the Fire, the 9b sports climb established in 2013 Chris Sharma.

Not even wet holds managed to stop Stefano Ghisolfi as earlier today he sent Stoking the Fire, the 9b that works its way through the immense Santa Linya cave originally bolted by 2003 and 2005 world champion Tomaz Mrazek and freed in 2013 by Chris Sharma.

Ghisolfi traveled to Spain in mid-December with this route in mind and, ignoring far from ideal conditions, he immediately started attempting the route in the Cova Gran cave. Despite the wet holds he made some good links and even questioned whether it might be possible to climb 9b in these conditions. Today we have the answer.

Stoking the Fire is Ghisolfi's sixth 9b, to which one must obviously add the 9b+ Perfecto Mundo sent in Margalef last year. The Italian will remain in Spain until the start of January and he may now set his sights on the direct version; harder still, this extension is still unclimbed. At least the holds up there seem dry…

I'm struggling a lot with humidity and fog here, I've never seen the cave so wet and every day it's hard to find motivation. I can try some good links but then I have to stop for some wet holds. I still have time to wait it dries, but if it's not getting better I will start some attempts anyway, is it possible to climb 9b with wet holds? @sara_grip • @thenorthface @lasportivagram #foryourmountain @camp1889 @epictv @hrtholds @misuraweb #neverstopexploring @fiammeoromoena #fiammeoromoena @frictionlabs • #climb #climbing #steghisati #rockclimbing #klettern #escalade #bouldering #climbing_pictures_of_instagram