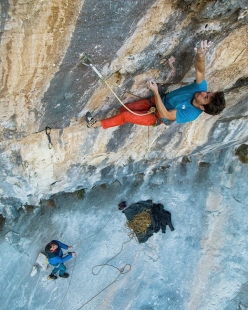 Stefano Ghisolfi climbing One Slap 9b a Laghel, Arco
Photo by Matteo Pavana / The Vertical Eye

Stefano Ghisolfi climbs One Slap, his third 9b

At the crag Laghel close to Arco, Italy, Stefano Ghisolfi has repeated One Slap, the 9b freed by Adam Ondra a week ago. This is Ghisolfi’s third 9b sports climb.

All Italian climber Stefano Ghisolfi needed was two rest days in order to finally come to grips with One Slap, the new 9b Adam Ondra freed at Laghel, Arco, last week. The route is the direct start to One Punch, a 9a+ freed after 10 days of attempts by Ghisolfi at the start of May.

Ghisolfi needed another four days to make the first repeat of One Slap and the 24-year-old has now climbed three 9b’s, after his 2015 first ascent of Lapsus a Andonno and his January 2017 repeat of First Round First Minute at Margalef in Spain. At present only two climbers have managed to redpoint routes harder than 9b, namely Chris Sharma and Adam Ondra.

Stefano Ghisolfi - attempt on One Slap

14.11.2017
Unstoppable Adam Ondra adds new 9b to Arco, Italy
Adam Ondra has made the first ascent of One Slap, a new 9b sports climb at the crag Laghel close to Arco. This is the second 9b in Arco and the third in Italy.

02.05.2017
Stefano Ghisolfi adds new 9a+ to Arco, Italy
At Laghel close to Arco, Italy's Stefano Ghisolfi made the first ascent of One Punch, a new 9a+ sports climb. Stefano Carnati repeated Il Frutto del Diavolo 8c+/9a at Bus de Vela and at Narango Alexander Megos made one of the hardest onsights on Italian soil.