Stefano Ghisolfi climbing Perfecto Mundo at Margalef, Spain. With this 9b+ bolted by Chris Sharma and freed by Alexander Megos, Ghisolfi is only the fourth climber in the world to master these difficulties, after Adam Ondra, Sharma and Megos
Photo by Enrico Veronese 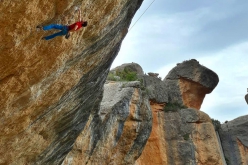 Stefano Ghisolfi climbing Perfecto Mundo, the 9b+ at Margalef, Spain, bolted by Chris Sharma and freed by Alexander Megos
Photo by Sara Grippo 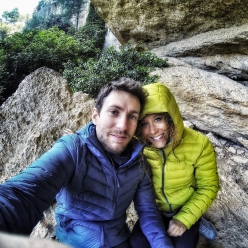 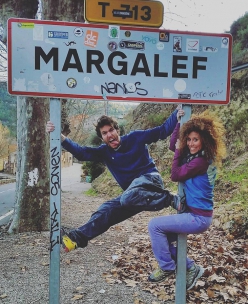 Interview with Stefano Ghisolfi after his repeat of Perfecto Mundo, the 9b+ at Margalef in Spain considered one of the most difficult sport climbs in the world. After Adam Ondra, Chris Sharma and Alexander Megos, the 25-year-old climber from Italy is now only the fourth climber to master these difficulties.

On Friday 7 December 2018 Stefano Ghisolfi settled the score with Perfecto Mundo, the 9b+ located at the sector Racò De la Finestra in Margalef, bolted years back - well before 9b+ even came into existence - by America’s Chris Sharma and freed earlier this year by Germany’s Alexander Megos. As reported, Ghisolfi, Sharma and Megos tried the project together in a sort of "rock sess" of the utmost difficulties, and after sending four 9b’s Ghisolfi is now only the fourth person in the world to master 9b+ , following in the footsteps of Adam Ondra (2012), Chris Sharma (2013) and Alexander Megos (2018). For the record, at present there is just one climb worldwide that is harder still, Silence 9c at Flatanger in Norway, and after Dura Dura at Siurana Perfecto Mundo is now only the second confirmed 9b+.

Stefano, those who haven’t stood below Perfecto Mundo will find it hard to comprehend how immense and overhanging this outing really is. What did you think when you saw it for the first time?
Well, I first saw it in a video and it’s true, you don’t realise how huge this overhang is, you only get a feel for it when you’re down there and see how wide and steep it is, it’s impressive. It looks like a huge overhanging wall created specifically to be climbed, with many pockets but only a few of which you can actually hold. Chris Sharma told me he had imagined the line while trying Gancho perfecto, he saw the holds from a distance and immediately decided he wanted to bolt and try it. As always, whenever he turns his attention to something, the outcome is amazing, completely rad. His climbs are always the best.

The climb fell into oblivion for a bit until you started trying it in December 2017
Both Alex Megos and I asked Chris if we could try the route, we knew it was his project but that he hadn’t tried it for a long time, and Chris told us yes, we could, and that he'd also be very happy to try it with us. In December I started working the route on my own, I watched the video of Chris to learn some of the sequences, but I also had to invent others in some sections and adapt the moves to my height and style of climbing.

Then came the rock session with Alexander and Chris
When Alex arrived I explained the beta, he used some of the same moves and changed a few, and we drew on each other to find the sequences that suited us best. Chris came to try the route again and I was amazed at how strong he still is, even years after not trying it he still climbed a sequence that Alex and I couldn’t.

How important was it to try the project with the others?
Everyone was fundamental: Chris bolted the climb and imagined the line and moves, years ago, even before the world’s first 9b+ was climbed. That’s an important detail. Alex made the first ascent and showed us that it was possible. And in December of last year I rediscovered this climb, after having being abandoned for years I gave it the attention it deserved.

32 days in Margalef... How much didwas this a mental game, and how much physical?
Both aspects were stressed to the extreme. Physically it was difficult because of the sheer intensity of the moves and the risk of injuring a finger, the crux is on a single-finger pocket that at one point is the point of contact you have with the rock. And it was hard on the skin, it’s easy to trash your fingers in Margalef and with taped fingers I stood no chance of sending. Mentally it was difficult to keep motivated, on the same same day I went from being super motivated to wanting to give up completely. I found it hard to understand if it was actually possible for me or if this was way beyond my limit and therefore a complete waste of time. This is the doubt that kept gnawing at me.

Looking at the videos of your attempts though, the lower section looks like a walk in the park. But before reaching the crux all that lower section is about 8c+…
I timed the various sections to get an idea of the effort involved and to reproduce it in my training regime, it took me about 3 minutes to reach the rest, where I then recovered for 2 minutes. From there I’d need about another minute to reach the crux, which means about 6 minutes of hard climbing before getting to the crux, where I obviously wanted to be as fresh as possible.

How many times a day could you tackle this sort of intensity?
After warming up I’d climb up the route, check out the sequences and brush the holds, then I’d give it two goes. Between one attempt and the next I’d rest for over an hour. After two attempts my body was KO and the next day, even though not fully recovered, I’d give it another two attempts.

Did you always fall off the same moves?
It was difficult to see improvements, after the first week I started to reach the crux but had no chance of getting past it. The only improvements were tiny sensations, of getting to the crux a bit fresher and less pumped. When I sent the route I only did the crux because I’d memorised the lower section completely. Even taken on its own, the crux was no certainty. In the beginning I’d manage to stick the moves once every three attempts, then about 50% of the time, and in the run-up to my redpoint I’d manage 4 times out of 5. Just the individual crux moves though, without having climbed all the lower section.

Even the slab above isn’t that easy, right?
After the crux there’s still one hard section that leads to a rest, from there there’s another hard move to get established on the slab. Chris expected that one might manage to get through the crux only to fall while mantling onto the slab, but fortunately neither Alex nor I did! The finishing slab isn’t difficult, if you don’t make any mistakes you shouldn’t fall from up there.

You made several trips to Margalef, often though conditions were not right
When I first started trying in December 2017 it was probably too cold, in April and May conditions were good when it was windy, but without the breeze it became too hot, just like in October. I had the best temperatures in November, but it rained too much and the route was always half-wet. During the November trip I couldn’t try the route until the last day, had it not seeped perhaps I would have sent it back then. I returned at the start of December and it was beginning to get cold, not too cold, ideal for sending. The route was finally dry again and on the second day I got the redpoint!

Four 9b’s, now a 9b+… only you, Adam Ondra, Chris Sharma and Alexander Megos
This is one of those things I never thought I’d achieve when I first started climbing in 2004. I always set myself goals, but honestly, to be there with these climbers would have seemed far too ambitious.

How can Stefano Ghisolfi improve even more?
I know my weaknesses, flexibility and technique on slabs. By improving these two things, which happen to go hand in hand, I think I can make a big step forward.

2018 has been an important year for you
Everything seems to have evolved in the best possible way, every piece has slotted into place perfectly, allowing for the next one to slot in, too. 2018 began with my repeat of La Capella at Siurana, shortly afterwards Sara’s transplant changed our lives. The World Cup then went well, although it could have gone even better, and in the end Perfecto Mundo, which was a liberation. This is a good moment and I'm ready to try some new projects.

Earlier you said that you always like setting goals. What climbs would you like to do now?
At the start of the year I made a photo collage where I indicated the projects I wanted to climb in 2018. These included La Capella, Pure Dreaming at Arco and Perfecto Mundo, which I managed to do, while those which I didn’t include Dreamcatcher at Squamish, Action Directe in the Frankenjura and boulder problem Gioia at Varazze but, having concentrated my efforts on Perfecto Mundo, I didn’t get a chance to try the much. I managed to try another climb at Arco, Queen Line, which I think will be my future project. It’s a 9b freed by Adam Ondra, but has a variation, a sort of King Line, which might be even harder than Perfecto Mundo...